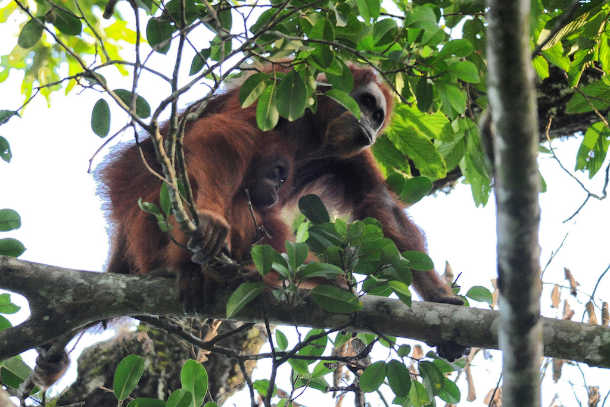 An orangutan and her baby make their way through the Leuser Ecosystem rainforest, located mostly within the province of Aceh on the northern tip of the island of Sumatra in Indonesia. Scientists and conservationists consider the Leuser Ecosystem to be among the most important rainforests left in Southeast Asia. (Photo: Chaideer Mahyuddin/AFP)

Religious leaders have committed to protecting Indonesia’s rainforests, the third largest in the world, by launching the Interfaith Rainforest Initiative (IRI) Indonesia.

Nine leaders representing Buddhism, Catholicism, Confucianism, Hinduism, Islam and Protestantism as well as a leader from the Indigenous Peoples Alliance of the Archipelago signed a joint declaration at the IRI Indonesia launch.

In the three-page joint declaration, they said the country’s rainforests, which cover nearly 94 million hectares, are an important habitat for millions of people. They provide livelihoods, food sources, herbs and clean water as part of their significant role in indigenous people’s lives and rituals.

However, they said unsustainable development policies have led to rainforest destruction.

“We are ready to mobilize our communities — from the grassroots to high-level groups — to work together with the government, social elements and businessmen as well as UN partners in protecting rainforests.”

The religious leaders said they will organize regular programs focusing on advocacy and awareness. Speaking to UCA News after the Jan. 31 declaration, Syamsuddin said IRI Indonesia will fight for the issuance of a regulation on rainforest protection.

“Regulations on forests and biodiversity already exist. Since this is a serious issue, however, we need a regulation on rainforest protection,” he said.

Meanwhile, Bishop Yuwono acknowledged that the initiative will strengthen Catholics’ efforts to protect the environment.

“We have been introduced to Laudato si’. Thus, I will regularly reintroduce it in various activities,” he told UCA News. The encyclical letter Laudato si' was issued in 2015 by Pope Francis, who called for swift action on climate change, among other issues.

“Since 2010, I have called on every couple to plant trees in their gardens before they get married. Besides protecting the environment, such a move serves as a reminder of their marriage,” Bishop Yuwono said.

Also attending the IRI Indonesia launch was Rev. Fletcher Harper, executive director of GreenFaith, an interfaith coalition for the environment based in New Jersey, USA.

“When religious leaders regularly teach and speak and educate their communities about the importance of protecting the forests, that will create cultural change,” he said.

“And we know from our conversations that these strong leaders here are committed. I think that combination of cultural change and public pressure is very important.”

The IRI is an international, multifaith alliance working to bring moral urgency and faith-based leadership to global efforts to end tropical deforestation. It was launched in June 2017 at the Nobel Peace Center in Oslo, Norway.