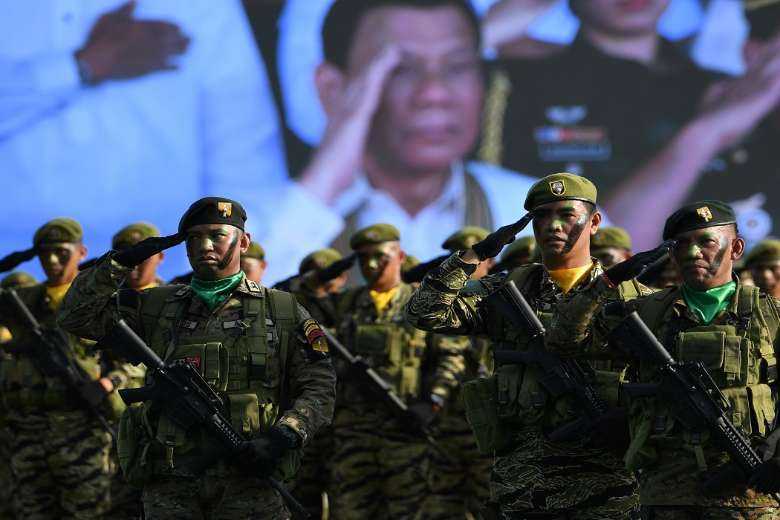 President Rodrigo Duterte (on video screen) salutes along with soldiers during the 121st founding anniversary of the Philippine army at the army's headquarters in Manila on March 20, 2018. (Photo: AFP)

Sara Duterte, daughter of Philippine President Rodrigo Duterte, has vowed to push for all Filipinos to do military service if she is elected vice president in May.

Serving in the military is an act of patriotism every Filipino must undergo to defend the country like in other nations, she said on Jan. 19.

“We see this in other countries like South Korea and Israel,” Duterte told reporters while on the campaign trail.

Duterte said teaching Filipinos military skills would instill discipline among the young. Military training is not only about arming the young but training them how to prepare for natural disasters like floods and typhoons, she said.

“This could be the key to disaster preparedness. The military are always present in times of calamities. Imagine if we have an entire citizenry who know how to respond quickly to disasters. Thus, we are teaching the people to be patriotic,” she said.

Patriotism is a virtue both of the young and old. It has to be grounded on uncompromised love for one’s country

Her opponents poured scorn on the proposed policy, with many saying the country needs demilitarization to help resolve issues.

The military has often been accused of committing rights violations, especially among the country's indigenous communities.

Staunch drug war and Duterte critic Father Flavie Villanueva said patriotism must be taught in homes by caring for those with the least, not in military schools.

Patriotism cannot be taught using arms but by education of the young to care for more than themselves, he said.

“Patriotism is a virtue both of the young and old. It has to be grounded on uncompromised love for one’s country. To choose the common good rather than oneself, this is true patriotism,” Father Villanueva told UCA News.

The Divine Word Society priest said one cannot love the country without embracing the poor as the country’s reality is characterized by the cries of its poor citizens.

Father Villanueva said Duterte’s statements came from a daughter whose father was spreading fear among the poor and marginalized.

“Here comes a program from a daughter who fiercely depicts fear in the streets. And whose father is responsible for the killing of thousands of helpless Filipinos as a mayor and president,” Father Villanueva added.

“If Sara Duterte’s idea of patriotism is to instill fear like her father, then mandatory military service should likewise be feared.”