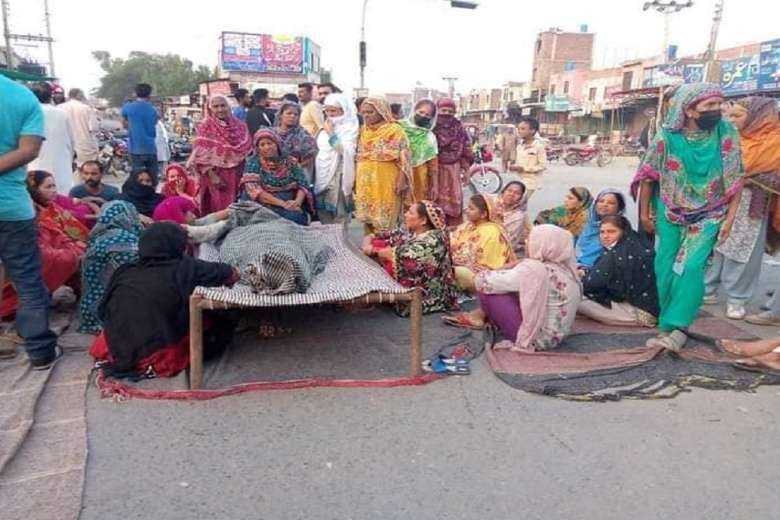 Christians protest against Sargodha Metropolitan Corporation on Oct. 4 after the death of two Catholic sanitary workers in a sewer. (Photo supplied)

Michael Masih and his colleagues were tasked with clearing a choked sewer at Chungi No. 9 crossroads in Sargodha, Punjab province. Two Catholic sanitary workers died in the sewer on Oct. 3.

“We descended the manhole with damaged wooden stairs. The cracked tiers were fastened with ropes that loosened. There was no precaution, oxygen cylinder or any kit. They died inside due to the poisonous gases,” he told police officials.

Masih, a member of St. Francis Xavier Parish, is now recovering after being hospitalized for several days. Hundreds of mourners protested on Oct. 4 alongside the bodies of the sanitary workers as officials urged them to bury their dead. “We want justice,” they shouted.

Traffic remained block at Chungi No. 9, one of the protest sites, for seven hours as angry Christians lit tires and chanted slogans against Sargodha Metropolitan Corporation (SMC). Funerals were held after police filed a first information report against three Muslim supervisors who forced Catholics to work on Sunday, the official holiday. The accused are on interim bail and none have been arrested.

The news was widely shared by Christian social media users.

“SMC has reached the height of tyranny. The chief corporation officer of SMC threatened his staff with termination if they didn’t work at night. Rescue 1122 [Punjab Emergency Service] employees refused to salvage the bodies, claim eyewitnesses. We demand protection for minorities in Pakistan,” Pastor Riaz Arif Malik, former vicar of Lahore Diocese, said in a Facebook post.

Whatever happened that night, it was Allah’s will. The corporation carries no fault

“All workers are part of our family. None of them are forced to work. Every sewer man working that night was equipped with all precautionary measures including gas masks. The second shift was initiated due to sewerage issues,” it stated.

“Whatever happened that night, it was Allah’s will. The corporation carries no fault. The operation was under SOPs [standard operating procedures]. One of the deceased was a daily wager. His brother or father will get the replacement job. The dues of regular employees will be urgently cleared as per government laws. We are in constant communication with their families. We haven’t left them alone.”

“The masks were defective. The deceased were sanitary workers, not sewer men. The deaths will continue as long as untrained staff descend in drains. The authorities should invest in improving their working conditions. They are on a suicide mission,” he told UCA News.

Meanwhile, Punjab Chief Minister Sardar Usman Buzdar has sought a report from Sargodha's commissioner and an investigation of the deaths of the sanitary workers. He also extended sympathies to their families and directed taking action against those responsible.

In a statement issued on Oct. 8, Archbishop Joseph Arshad of Islamabad-Rawalpindi expressed deep sorrow over the tragedy and condemned the loss of precious human lives.

“Forcing Nadeem Masih and Faisal Masih to work without any protective measures was criminal negligence. Human life without any distinction of caste, creed and profession is precious and respectable. Those responsible must be punished. A policy should be created to prevent such incidents,” he said.

Father Sarfraz Simon, diocesan director of the National Commission for Justice and Peace, urged representatives of the provincial government to visit the protesting mothers and children.

“They should heal the wounds of the bereaved families and ensure them justice and support their demands,” he said.

For a century this lower caste has been tasked with cleaning the gutters. We have forcefully pasted this tag on their forehead. Nobody listens to their concerns

In 2017, Christian sanitary worker Irfan Maish died in a government-run hospital in Umerkot town in Sindh province after doctors allegedly refused to touch his unclean body.

Christians are often despised by the majority-Muslim population in Pakistan and referred to as chuhra, a pejorative caste-based term meaning sweeper or janitor.

In 2016, Punjab's government struck down the policy of recruiting only non-Muslims for sanitation jobs. Even so, government advertisements continue to reserve sweeper jobs only for Christians. Christian activists and rights groups often point out what they describe as a discriminatory job policy that further marginalizes and belittles the country’s tiny minority population.

The government denies the existence of caste practices. However, human rights activists say religious minorities often face caste-based discrimination from people who avoid sharing meals or a glass of water with them.

“For a century this lower caste has been tasked with cleaning the gutters. We have forcefully pasted this tag on their forehead. Nobody listens to their concerns. We still follow the tradition of old Hindustan. The Dalits continue to suffer despite changing their religious identity,” said columnist Kashif Baloch in a video message.

“In our society, chuhras are not considered humans. Even if they die in sewers, the main concern is about the drains being further clogged. Nobody was ready to recover the bodies of Christian Dalits that night. The equipment meant for Christian sweepers is embezzled. We have to descend the gutters of our mind as chuhras and clean them.”