Sanctions will hurt Myanmar reform and invite China in

As the U.S. mulls penalties, church figures and analysts warn the move could backfire 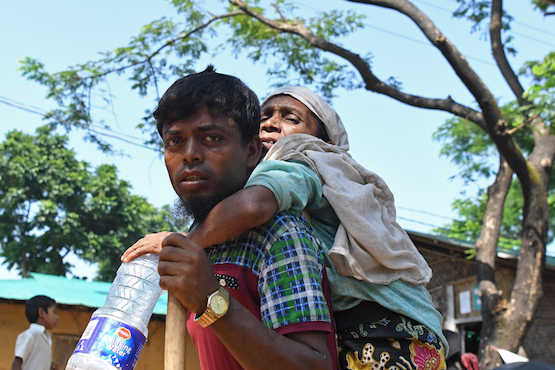 A Rohingya refugee carries an elderly woman toward a makeshift shelter at Kutupalong refugee camp in the Bangladeshi district of Ukhia on Oct. 26. (Photo by Tauseef Mustafa/AFP)

Church leaders and political commentators in Myanmar fear fresh sanctions against the country over the Rohingya refugee crisis could drive it back into the arms of China.

They would also prove a stumbling block to leader Aung San Suu Kyi's reform agenda and harm millions of impoverished people in the country after decades of military rule.

After dithering for more than a month over the humanitarian crisis, which has seen 600,000 Rohingya flee to neighboring Bangladesh due to a two-month military crackdown, the United States says it is now mulling sanctions.

"We express our gravest concern with recent events in Rakhine State and the violent, traumatic abuses Rohingya and other communities have endured," the U.S. State Department said in a statement.

"It is imperative that any individuals or entities responsible for atrocities, including non-state actors and vigilantes, be held accountable."

Under the U.S.'s Global Magnitsky Human Rights Accountability Act, the president can block or revoke the visas of certain foreign individuals and entities or impose property sanctions on them.

The U.S. government last imposed sanctions on Myanmar in 1997 while the military junta was in power, but these were lifted in October 2016 by Barack Obama.

"The US and international community should take another approach by collaborating with the Suu Kyi-led government instead of applying pressure and imposing new sanctions as the country is a transitioning democracy,” Bishop Pyone Cho told ucanews.com.

The bishop added that as Myanmar's leader, Suu Kyi had been pushing hard for development and the international community should help her implement her vision.

"New sanctions will be a stumbling block to Suu Kyi's reform agenda, especially economic growth and tackling poverty, so it is not a better option for Myanmar's transition to democracy.”.

Father Soe added that US sanctions could force Myanmar into the orbit of China, which has growing and established economic interests in the country.

Khin Zaw Win, director of the Yangon-based Tampadipa Institute, said the country was trying to maintain ties with the United States and the threat had come due to inadequate handling of the Rakhine crisis.

He added that the US move was strategic and mainly targeted the Myanmar military. It would not be the same as the earlier US sanctions.

"In terms of the Rakhine crisis, I am not satisfied with the civilian and  military handling of the issue so we will wait and see how Aung San Suu Kyi and the military collaborate together in solving the Rakhine problem,” Khin Zaw Win told ucanews.com.

Yan Myo Thein, a Yangon-based political commentator, said Myanmar's transition to democracy was fragile and sanctions could encourage the country to look to China and Russia.

"The international community should demand the military improve the human rights situation and handle issues through transparency, rather than pursuing constant pressure as the civilian-military relationship is a key factor for transition to democracy," Yan Myo Thein told ucanews.com.

On Oct. 24, Myanmar's military released a 10-point statement regarding "Rohingya militant attacks” in the Buthidaung-Maungdaw region of Rakhine.

It said security forces took action in accordance with the law and did not overstep the law.

"One-sided statements and accusations against Myanmar and security members over the terror attacks of extremist Bengalis in the west of Rakhine state are totally untrue, and the international acts done under the pretext of the facts such as human rights and humanitarianism may hamper national security and the national interest."