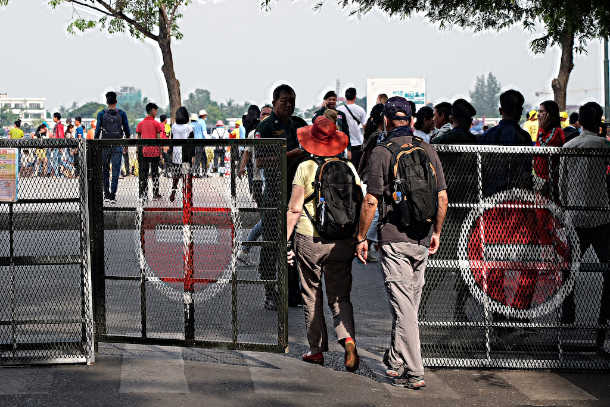 Early crowds at this year's Water Festival in Phnom Penh were thin amid tight security after exiled opposition leader Sam Rainsy said he would return and lead a popular and peaceful uprising. (Photo: Luke Hunt/ucanews)

This year’s Water Festival is not shaping up as the best of times. Sam Rainsy’s promised return and long march with a “tsunami of supporters” to unseat Prime Minister Hun Sen did not materialize but it did prompt authorities to impose tight security measures across Cambodia.

His plan — widely discredited as improbable — was to arrive on Nov. 9, Cambodia's Independence Day, one day before the annual regatta that marked the start of the most celebrated festival of the year.

This is when the countryside traditionally comes to the city, a cherished holiday. In past years more than a million people could pour into Phnom Penh, pay homage to their monarch, meet up with old friends and relatives, and indulge in food and drink while punting on the boat races.

It’s a three-day party timed to coincide with the rice harvests and changing of the season, a well-earned respite for farmers whose families live hand to mouth and rarely venture far from home.