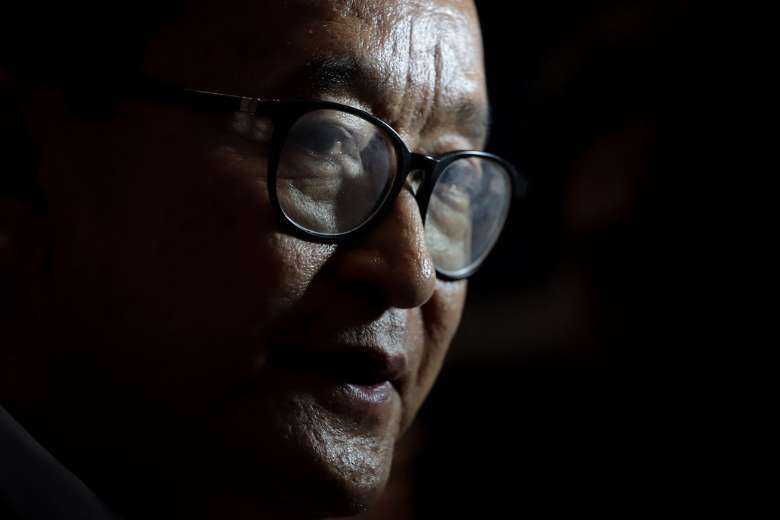 Phnom Penh Municipal Court has sentenced former opposition leader Sam Rainsy to 25 years in prison and deprived him of the right to vote or stand as a candidate in upcoming elections for plotting to overthrow the government of Prime Minister Hun Sen.

They were charged following Sam Rainsy’s 2019 promise to return to Cambodia from self-imposed exile in France, lead a popular rebellion and overthrow the government.

Phil Robertson, deputy Asia director of Human Rights Watch, said the charges were “politically motivated allegations manufactured by a dictatorial, single-party state” and the “outrageously harsh prison” terms were intended to stop exiles from ever returning.

“Hun Sen didn’t dare allow even a minimally fair proceeding, barring Mu Sochua and the other defendants from returning to the country to have their day in court,” he said. “There seems to be no limits to the violations of human rights this government will inflict on the Cambodian people.”

Perhaps a hundred or more supporters have also been arrested and are currently before the court in a mass treason trial, which has outraged human rights groups and pro-democracy advocates.

The verdicts were announced on March 1 as opposition politicians struggle to form new parties ahead of commune elections in 2022 and general elections the following year, aiming to challenge Hun Sen’s one-party rule.

Among them are past CNRP lawmakers and former prime minister Prince Norodom Ranariddh, who needed three years to recover from a car accident which kept him out of the 2018 ballot.

“His health is much better, he walks on his own, has said a lot,” Funcinpec spokesman Phan Sithy said recently. “We strongly hope that Funcinpec will get seats in the next election.”

However, Ranariddh’s comeback as the head of the royalist Funcinpec has been delayed after he failed to turn up at the party’s congress last weekend, which his supporters said was due to travel difficulties associated with the pandemic.

He is now expected to return within the next two months as concerns about his health persist, leaving his son, Prince Norodom Chakravuth, to run a party that once won government but suffered a spectacular fall from grace amid allegations of gross corruption.

The list of new political parties include the Cambodia Reform Party (CRP), Khmer Conservative Party (KCP) and the Cambodian National Love Party (CNLP), who are organizing themselves ahead next year’s commune elections.

Hun Sen’s long ruling Cambodian People’s Party (CPP) won all 125 seats contested at the 2018 poll, soon after the CNRP was dissolved by the courts amid allegations its leaders were plotting a “color revolution” designed to oust the prime minister.

Some 20 parties contested that poll but human rights groups claimed 16 of them were merely CPP proxies, while three opposition outfits — the Khmer Will Party (KWP), League for Democracy Party (LDP) and the Grassroots Democracy Party (GDP) — all failed to make any impact.

Analysts said none of the current crop of parties were capable of winning control of parliament in a national ballot, adding “when judged on past performances they were unlikely to win a seat.”

“There is speculation that a coalition could be formed from among minor parties,” one analyst who preferred to remain anonymous said. “At the moment there’s too many of them and that threatens to split the votes among voters who would like to see change.”

A key issue confronting opposition parties is the CPP’s organizational machinery and its formidable reach across Cambodia, particularly in the countryside where Hun Sen still curries favor among older voters for ending a devastating 30-year war.

There is also a lack of credible alternatives among the opposition ranks who enjoy a high public profile. Former CNRP leader Kem Sokha remains highly popular but has also been charged with treason and cannot stand unless he secures a not-guilty verdict.

Another analyst also said a coalition of the minor parties had been floated, with the KWP, CNLP and CRP, which is still seeking registration, the most likely candidates.