Catholic leaders pleaded with the public to continue to observe social distancing, use masks and to stay home 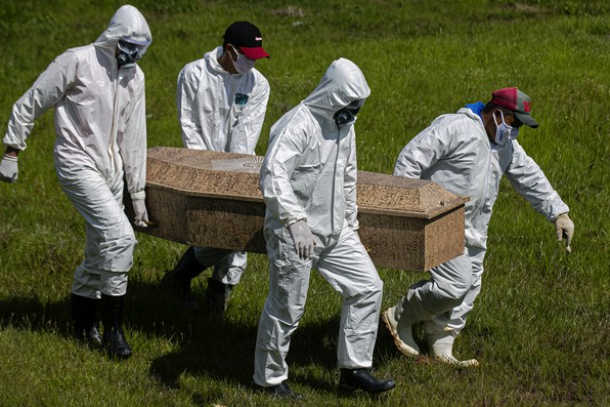 Salvadoran Cardinal Gregorio Rosa Chavez called for transparency and dialogue and for political parties to find common ground as disagreements between government branches led to the expiration of COVID-19 restrictions even as confirmed coronavirus cases in the country are rising.

Cardinal Rosa Chavez, auxiliary bishop of San Salvador, and Archbishop Jose Luis Escobar Alas have lamented the dysfunction between El Salvador's president and members of the general assembly, which led to the expiration in mid-June of the "quarantine law" that had regulated the country's activities during the COVID-19 crisis.

On June 16, the country of more than 6.5 million reported a total of more than 4,000 confirmed cases and hit a daily high of 125 new reported cases, though some believe the figures are underreported. However, some also believe that strict lockdown measures implemented in mid-March by the government of President Nayib Bukele led to the relatively low figures. However, after the president and the general assembly failed to agree on a plan in June, lockdown measures expired.

Though a phased plan to open the economy was announced, many Salvadorans -- including the large majority that earns a living in the informal economy, selling wares and services on the streets -- began operating as normal almost as soon as the quarantine law expired. Even before the lockdown expired, however, some news organizations were reporting that morgues and hospitals were overwhelmed, but the reality of COVID-19 among the Salvadoran population had not been fully disclosed.

Catholic leaders pleaded with the public to continue to observe social distancing, use masks to guard against contagion and to stay home.

The cardinal came under fire after he offered a critique of the president June 7, saying that "people need to work, they need to earn a living for their family," but the conditions for that to happen had to be carefully analyzed, and the president's "dictatorial position" did not lead others to feel that they were included in that process.

Though one of the members of the general assembly asked that the cardinal participate, along with a member of the United Nations, as a neutral party to talks that could lead to dialogue between the executive and legislative branches of government, the prelate found himself under vicious attacks online, as some accused him of being in the pocket of the parties that disagree with the president.

The cardinal, however, has a long history of attempting to mediate disagreements, including being involved in talks that eventually led to peace accords and brought an end to the country's 12-year civil war in 1992.

When the cardinal called on the current administration to be "open to all," to be collaborative and not confrontational, he raised the ire of supporters of the populist Bukele, whose campaign strategy was to attack the other parties that had previously held power in El Salvador. For years, the Catholic Church has called for dialogue as a path toward lasting peace in the country, particularly as polarization has been on the rise.

"We see permanent confrontations, offenses, insults of delegitimization of the adversary in the middle of this tragedy, and that we cannot accept as correct," the cardinal said June 7. "Hopefully, we can correct the course, because the way we are headed, the country is going to suffer more than expected."

After the cardinal was attacked online, Archbishop Escobar came to his defense and said even though he wouldn't defend the cardinal's opinions, "because in opinions, it is always valid to disagree," he said he wanted to defend him as a person.

"He enjoys our highest esteem and appreciation for his great human quality, his exemplary life as a priest, his personal integrity and the invaluable contribution he has given and continues to give to our country," he said.