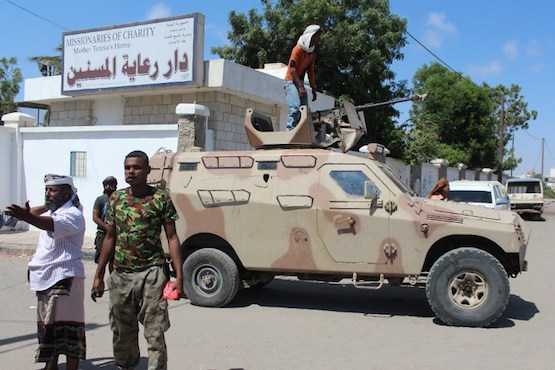 Yemeni pro-government fighters gather outside an elderly care home in Yemen's main southern city of Aden after it was attacked by gunmen on March 4. Indian church officials dismissed reports that Father Thomas Uzhunnalil, who was kidnapped in the attack, was being tortured by Islamic State agents. (Photo by AFP)

By ucanews.com reporter in Kochi

Church officials dismissed as rumors social media messages that said an Indian Salesian priest kidnapped by suspected Islamic terrorists in Yemen on March 4 is being tortured and will be crucified on Good Friday.

"We have absolutely no information" on Father Thomas Uzhunnalil, said Father Mathew Valarkot, spokesman for the Salesians' Bangalore province to which the kidnapped priest belongs.

Suspected Islamic terrorists took away the priest after they attacked a home for the elderly operated by the Missionaries of Charity in Aden, and gunned down some 16 people including four nuns.

Church offices in Vatican and Vatican diplomatic channels are also working to locate the priest and secure his release. Father Valarkot said the Salesians have been pressuring the government for answers.

"But even today we do not know who has taken him and what their motives are because no one has claimed responsibility," Father Valarkot said. Salesian Father Thomas Uzhunnalil was taken away by suspected Islamic terrorists after they attacked a home for the elderly operated by the Missionaries of Charity in Aden. (Photo supplied)

Messages on social media have claimed that Islamic State agents kidnapped the priest and are torturing him. An undated and unnamed message also said the kidnappers plan to crucify the priest on Good Friday.

"These are all rumors. When no has claimed responsibility for the kidnapping, how do we know other details," the spokesman said.

The church is in "constant touch" with the government on Father Uzhunnalil, said Father Joseph Chinnayan, deputy secretary general of the Indian Catholic bishops' conference. The foreign ministry has "informed us that they have stepped up efforts to locate the priest," Father Chinnayan said.

According to Father Valarkot, "we need to be patient with the system," noting that an Indian Jesuit kidnapped by Islamic terrorists in Afghanistan was released after nine months following Indian government efforts.