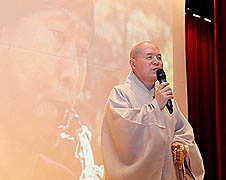 Venerable Jaseung at the screening of the film

Staff at the headquarters of the Jogye Order of Korean Buddhism in Seoul say they have been inspired and moved by the missionary work of late Salesian Father John Lee Tae-seok. The workers from the largest Buddhist denomination in South Korea were speaking after watching “Don’t Cry, Tonj,” a film about the life of the Korean Salesian missioner who worked in Tonj, in war-torn Sudan. The screening for 200 monks and lay workers was organized by Venerable Jaseung, chief executive of the order. “I watched the film twice and was in two minds as to whether I should show it to the staff,” he said. “It depicts the good life of a Catholic missioner and I was worried some of us would convert to Catholicism after being moved by the film,” he added. “Father Lee who lived an unselfish life and cared for underprivileged people can be a good role model for us. If we could have one Buddhist cleric like him, the better it would be for Buddhism,” he said. “I hope our clerics will be encouraged by the film and become clerics of purpose and honesty,” he added. Father Lee, graduated from a medical college in 1987 and was ordained as Salesian priest in 2001 before serving the sick, poor and children in Tonj, Sudan. During his nine years there, he built a clinic for Hansen’s disease patients and a boarding school. He also formed a brass band to raise children’s spirits during the country’s civil war. Father Lee died in January 2010 at age 48, two years after being diagnosed with colon cancer. “Father Lee’s story was so moving. His life crosses religious boundaries and his sharing of everything he owned is a good example for all of us,” one Buddhist worker said.   Related report ‘Don’t Cry, Tonj’makes everyone weep   KO13051.1638