The 46-year-old Italian is an economist and professor of economy policy, an adviser to the governing office of Vatican City State, a consultant to the Synod of Bishops and coordinator of the economy task force of the Vatican's COVID-19 commission.

Sister Smerilli also is one of the driving forces behind the ongoing "Economy of Francesco" project, which is bringing together young economists and other young scholars searching for ways to make the economy more responsive to human dignity and more respectful of creation.

She becomes the sixth female undersecretary of a Vatican office; two serve at the Dicastery for Laity, the Family and Life, and one each at the Synod of Bishops, the Vatican Secretariat of State and the Congregation for Institutes of Consecrated Life and Societies of Apostolic Life.

In a statement after the announcement of her appointment on March 24, Sister Smerilli said, "I will now strive to bring my expertise in the field of economics and the social doctrine of the church to an ever more concrete service to the mission of the church and the Holy See."

"We are going through times of great trial in which the values on which humanity has always been founded are being questioned, in which individuals and families are suffering from a devastating social, political, anthropological and cultural crisis that the COVID-19 pandemic has contributed to exacerbate, and in which reference points are wavering," she said. Believers, in response, are called to rediscover what truly sustains them.

Thanks to the contributions of "many colleagues, experts, academics and external partners, believers and nonbelievers," she said, the Vatican COVID-19 commission has highlighted "how much humanity feels wounded and needs concrete answers and love to recover. We cannot go back to the old world; we need to prepare the future well." 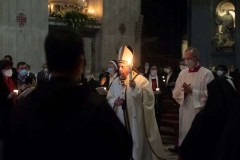