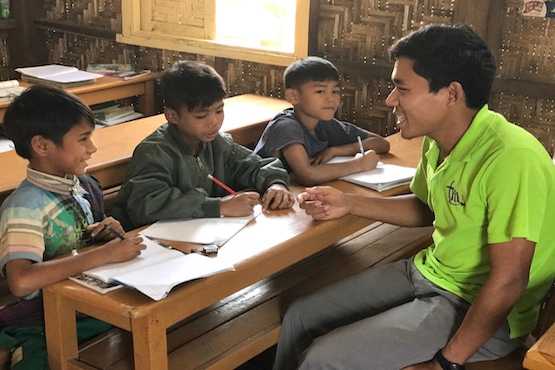 Patrick Zaw Tan, a project officer at the Don Bosco Friend of Youth Center, with some of the center's children during a school lesson. (ucanews.com photo)

As part of an an outreach program, Salesian Father Peter Myo Khin and his co-workers go to railway stations and bus terminals to help boys living on the streets of Mandalay, the second largest city in Myanmar.

Most of the boys they meet come from different backgrounds; some are runaways while others come from broken families living in poverty.

"We do the outreach program two or three days a week and we make friends with street children and find out about their daily lives and family backgrounds," said Father Myo Khin.

The outreach program is the first step in helping these children and giving them a better life beyond the streets.

The outreach is part of the Salesian-run Don Bosco Friend of Youth Center which was set up in 2013 and aims to help boys living on the street be part of mainstream society.

The center runs 24 hours a day and has with six paid staff. It provides temporary shelter, food, healthcare and formal and non-formal education.

Some 30 boys — 24 Buddhist and six Christian, aged four to 18, live at the center permanently while dozens more come and go.

Girls who find themselves on Mandalay's streets are offered help by the Good Shepherd sisters who have their own out-reach program and center. Father Peter Myo Khin with children at the Don Bosco Friend of Youth Center in Mandalay in 2015. (Photo supplied)

"It is a safe place for the boys and we treat them as family members," Father Myo Khin, who runs the program, told ucanews.com.

Patrick Zaw Tan, project officer, said that he meets with each boy on a daily basis and talks to them like a close friend.

"We try to give formation to them within the first two weeks of their arrival but it is a most difficult process as they live most of their time freely on the streets and just think about playing games," said Zaw Tan.

He said that some children sniff glue, as is common among the urban poor, so the center helps them to stop that habit. Among the 30 boys, 22 are attending school and another eight are pursuing non-formal education.

Father Myo Khin said that they encourage the boys to attend school as some have had to drop out due to their families' poverty. If the boys do not want to attend school, they can pursue a non-formal education at the center.

"Education can change people's lives and their habits and attitudes," he added.

A 15-year-old boy who is in the 7th grade, ran away from his village in Kyaukme Township, northern Shan State in 2010.

His mother was working and his father had taken a second wife and abandoned the family. "My grandfather beat me and I was not happy at my home so I went to the streets and then I took a train to Mandalay city," he said.

He has lived at the Don Bosco center since it opened and he also helps take care of other boys living there.

"I will try to pass the matriculation exam to get into university because I want to be a tour guide as I am interested in learning and talking English," the ethnic Palaung boy told ucanews.com. Working on the construction of a new building at the Don Bosco Friend of Youth Center in Mandalay on March 3. (ucanews.com photo)

Father Myo Khin said that poverty is the main factor that leads children to live on the streets.

"If we can't help people escape poverty, kids will remain on the streets. So the government needs to create job opportunities and provide for the basic needs of families such as permanent homes," the priest said.

Zaw Tan said that most families are poor so they force their children to work and earn money and some parents beat the children if they refuse to do so. "The children are not happy in their homes so they run away and live on the streets," Zaw Tan added.

He explained that they also run a family reconciliation program if the children have a willingness to go home and the parents are ready to accept and care for them.

The center received its official registration in Mandalay in 2015 and eventually hopes to be able to house up to 100 boys.