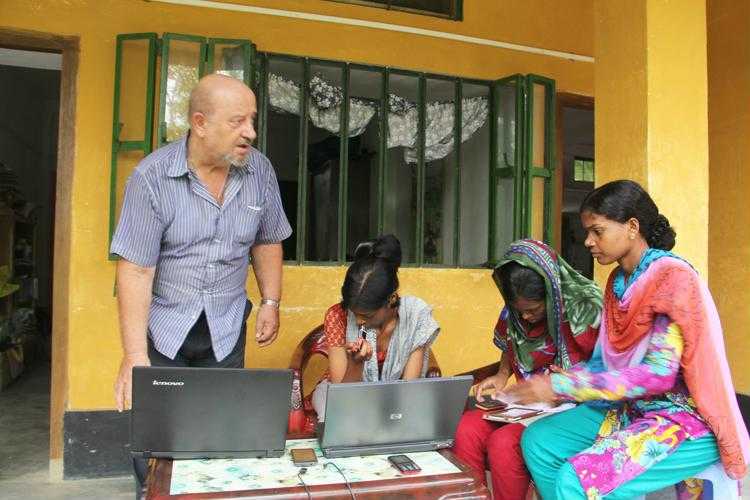 Italian Xaverian Father Luigi Paggi teaches computing to Munda girls in a hostel he set up about 15 years ago in Shyamnagar in southwest Bangladesh. (Photo by Stephan Uttom/ucanews.com)

The 100 kilometers of potholed road take about five painful hours to negotiate on the journey from Satkhira district town to Shyamnagar, close to the lush Sundarbans, the world's largest mangrove forest in southwestern Bangladesh.

Inside the forested surroundings amid dozens of dilapidated, thatched and mud-walled residences of the Munda people, a tin-roofed and brick building greets visitors to Bongshipur village.

Endless shrimp farms surround a village that has no roads except for the narrow edges of the farms' boundaries. The rainy season turns villagers' huts into small islands seemingly floating on water.

Most villagers are shrimp farm workers, some are agricultural laborers and others eke out a living from brick kilns. During the monsoon, most villagers suffer from a scarcity of work and struggle to feed families.

At the brick building, with a broad smile on the face, 70-year-old Father Luigi Paggi teaches English and computing to 20 Munda girls from poor families who reside in the boarding facility.

Revered by Munda people and local Muslims as "the saint of the forest," the Italian priest started his unprecedented and extraordinary mission to emancipate the downtrodden minority group 15 years ago.

Father Paggi, who belongs to the Society of St. Francis Xavier for Foreign Missions, set up two hostels and several schools to assist boys and girls whose poor parents were unable to support their education. The priest also carried out a strong and successful campaign against endemic child marriage among the Munda and pioneered a voluntary organization.

Father Paggi's family, friends and relatives back home in Italy have been generously supporting his initiatives.

Minoti Munda, 24, a Munda girl who is studying for a bachelor of science degree at a university in Khulna divisional city, says Father Paggi gave her a new life.

She was 11 and a sixth-grader when her parents arranged her marriage to a boy from a relatively affluent family. With the help of her paternal uncle, she fled home and moved to Father Paggi's hostel.

"My parents were angry with me as they thought I had tarnished their image socially after the arranged marriage was broken. They didn't contact me for more than six months," Minoti recalled.

"Father Luigi gave me a new lease of life. My life could have been wasted like many other Munda girls. Today, more than 120 Munda boys and girls are studying in colleges and universities thanks to Father Luigi."

Minoti recently joined an indigenous students' organization. When she has a job, she wants to help more boys and girls from her community to prosper in life by supporting their education.

Bahamoni Munda, 24, said all five of her elder sisters were married off aged 12-14 and she saw how they suffered.

"They faced various physical and mental problems due to early marriage. My father was a poor shrimp farm worker, so he gave them in marriage to lessen the economic burden of the family. I thought my life was going to be like my sisters' lives, but Father Luigi rescued me," she told ucanews.com.

"If I get a government job, I will be able help my community more. I can ensure they get various benefits provided by the government and they can improve their lives,"

Child marriage is a major social problem in Bangladesh. The nation currently ranks fourth in global rankings. According to UNICEF, 56 percent of girls get married in Bangladesh before they are 18 and 22 percent get married before 15. A Munda day laborer in Shyamnagar. About 5,500 Munda living inside the Sundarbans mangrove forest are among Bangladesh's most marginalized communities. (Photo by Stephan Uttom/ucanews.com)

A life in service to downtrodden communities

Born in 1948, Father Paggi was ordained a priest in 1972. Three years later, his congregation sent him to Bangladesh to work in southern Khulna Diocese where Xaverians have been active for decades.

From 1975-80, the priest served as an assistant pastor at a Catholic church in Satkhira. For the next 25 years, he worked for the poor and socially neglected cobbler community in Khulna, Jessore and Satkhira districts, helping them organize and get basic education to improve their lives and livelihoods. Only a few were Christians and Muslims, with the majority Hindus.

Father Paggi came to know about the small and little-known Munda community living in the Sundarbans.

"I learned about them from some Muslim students whom I taught English. They are animists or nature worshippers and they have no religious books. I found them incredibly interesting and I decided to work for them," the priest told ucanews.com.

Father Paggi was saddened by the poverty and miserable lives of the Munda.

"I found their conditions terrible and worse than the cobblers. They were illiterate and lived in congested and unsanitary houses. Local Muslims considered them untouchables. I felt sad and made up my mind that I must help and work for them as a missionary," he recalled.

Father Paggi's superior didn't like the idea and warned against the adverse consequence of a "risky mission" in such a faraway place.

"I was determined and didn't wait for permission. I just moved in. About six months after I started here, I got formal permission to work. I also received permission from the government to start my mission for the Munda," Father Paggi said.

Unlike many foreign missioners, Father Paggi consciously avoided one thing — religious conversion of the community.

"People call this place a mission but there are no Christians. Sometimes they ask about Christianity and Jesus Christ, so I explain to them. Unless they are interested, I never insist," the priest said.

The Munda are a proto-Australoid ethnic group, originally from Bihar state of India, who migrated to present-day Bangladesh more than two centuries ago during British colonial rule.

About 40,000 Munda are spread over northwest and southwest Bangladesh. The name Munda (head) has its origin in Sanskrit and Munda people believe their first man and woman were born from the head of Sing Bonga, the main god of the Munda religion.

In Bangladesh, people identify the Munda as "Bunos" (of forest), referring to their ancient occupation as forest clearers.

About 5,500 Munda people live in 23 villages like Bongshipur in Shyamnagar. For about 230 years, they have remained one of the most marginalized communities due to their lack of education, poverty and disconnection from mainstream society.

The Munda of the Sundarbans speak Sadri, whereas their mother tongue is Mundari.

Father Paggi inspired a group of educated young Munda to set up the Sundarbans Adivasi Munda Sangstha, a voluntary organization to support the community.

"Landlords brought the Munda to this area to clear the forest for agricultural land, and since then their life has been stuck here forever. The Munda had their own language, religion, culture, social system and structure — all are getting lost slowly," Krishnapada Munda, 33, executive director of the group, told ucanews.com.

"Our forefathers were poor, illiterate and ignorant, so they couldn't do much in preserving our heritage rather than earning money to feed families. Father Luigi has brought changes for Munda who were neglected and ignorant for over 200 years. He helped them come outside and think big, and he also helped us to mix with people of other communities," said Krishnapada, the first graduate from the Munda community in Shyamnagar.

"The priest just didn't provide education and stop child marriage, but he also inspired us to revive our culture, traditions and faith. One day he will leave us but his ideals, teachings and love for people will always inspire and encourage us to move forward." A Munda house in a village in Shyamnagar. (Photo by Stephan Uttom/ucanews.com)