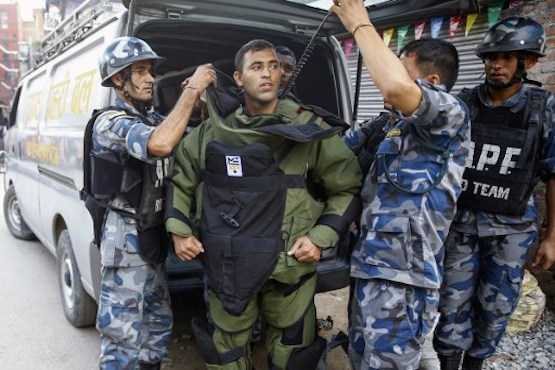 A member of a Nepalese police bomb disposal unit prepares to defuse an improvised explosive device planted near a school in Kathmandu on Sept. 20, 2016. (Photo by AFP)

Gas cylinder bombs exploded in two private schools in Kathmandu sparking protests among parents and school authorities over the safety of children in the country.

Other explosives and suspicious items were also found in seven more schools Sept. 19.

There was no reported damage or casualties and three people were arrested, according to Pradhummna Karki, senior superintendent of police. Pamphlets of Young Communist Force Nepal demanding free education for children were recovered from the sites where the bombs were planted, local media reported. Police have not yet divulged information about the motive or those responsible for planting the bombs.

Two small-sized cylinder bombs were put in front of the main gates of Akash Deep Boarding School and Manakamana Higher Secondary School in Jorpati, Kathmandu. They detonated within 10-15 minutes of each other.

According to her, the bomb caused minor damage to the front gate. There are around 800 students at the school that runs classes from nursery to grade 10.

Many students stayed home after hearing the news forcing the schools to close on Sept. 20. "There were fewer students today so we decided to close down classes," she said.

"This is a violent act though no casualties were reported. It is very unfortunate that people are targeting schools and young children," said Father Silas Bogati, executive director of Caritas Nepal, the Catholic Church's social service wing. The Catholic Church runs various schools across the country, including some premier education institutions in Kathmandu.

"This kind of violence is likely to cause psychological and emotional harm to schoolchildren. All students and parents will be worried now," he said.

The Private and Boarding School’s Organization, the umbrella organization that groups over 8,000 private schools, condemned the attack and met with the education minister to demand that schools remain a safe place for students.

"This is the first time that a series of schools have been targeted.  It is highly deplorable and we want justice," said D.K. Dhungana, its general secretary.

"We demand stringent action against those involved in this incident and the government’s commitment to improve security at education institutions," he said.

Maoist rebels, that for over a decade waged a conflict against the government that ultimately led to the fall of the monarchy and the establishment of a republic, had been campaigning to provide near-free education to all students.

Religious who run Catholic schools say the Maoists do not seem to differentiate between profit-oriented and non-profit private schools.

Private schools are popular in Nepal because many of the government-run schools lack proper infrastructure and teachers.