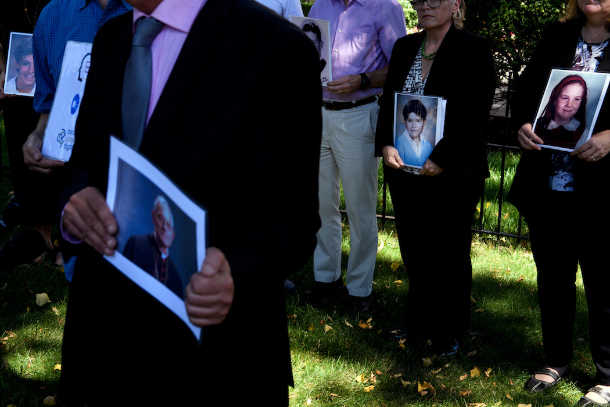 Activists speak during a press conference outside the Vatican's U.S. embassy about sexual abuse in the Catholic Church on Aug. 30, 2018 in Washington, DC. Presidents of all episcopal conferences are to meet in Rome in February to discuss safeguarding children from sexual abuse. (Photo by Brendan Smialowski/AFP)

During his visit to Chile in January 2018, Pope Francis was abruptly confronted with the truth about Bishop Juan Barros of Osorno and his cover-up of the child abuse of former priest Fernando Karadima.

As he spoke to Chilean priests and religious, he invited them "not to dwell in disheartenment" but to "ask God to grant us the clear-sightedness to call reality by its name."

Just a year later, final preparations are underway for an unprecedented meeting of the presidents of all episcopal conferences in Rome from Feb. 21-24 on the subject of safeguarding children.

We know now that pedophilia is only a small but very dramatic part of the much wider problem of clerical sexual abuse that has poisoned the church in all corners of the globe.

Much has been done to confront the problem during the last two pontificates: the renewal of canonical norms, the formulation of guidelines by episcopal conferences, the development of formation projects and other initiatives. There have been significant recent letters by Pope Francis.

In preparation for this landmark event, La Civiltà Cattolica has published an ebook to raise awareness of this suffering. Safeguarding is the fourth in its Perspectives series and written by the church's most experienced experts on the topic and those intimately involved with the upcoming summit.

The ebook comprises 10 articles that examine a range of aspects of the problem from different viewpoints.

Safeguarding begins with an editorial, "The Problem of Pedophilia," that first appeared in 2002. It describes the nature of pedophilia and the people who carry out these acts. It speaks of the motivations behind the wall of silence that is created around pedophile acts and how to overcome this silence. It discusses sex tourism, the spread of pornographic and other material on the internet, and cases involving priests and religious. These matters are even more relevant today.

Two articles have been co-authored by Father Hans Zollner, SJ, the church's leading specialist on protection and managing offenders and president of the Gregorian University's Center for Child Protection, and Father Giovanni Cucci, SJ, the safeguarding manager for the Euro-Mediterranean Province of the Jesuits for cases of abuse. They look closely at the psychological aspects of the problem and how to combat cultures of pedophilia.

Two more articles by Father Zollner focus on children: their protection and the spiritual wounds they, and all abuse victims, suffer.

An article by one of La Civiltà Cattolica's finest writers, Father Diego Fares, SJ, explains the scandal of abuse and cover-up in Chile. With the process of healing in the church there ongoing, the article presents the scandal in chronological order and outlines steps taken to rid the Chilean Church of this scourge and, most importantly, its efforts to support and heal the abused.

In addition, Father Federico Lombardi, SJ, selected by Pope Francis to mediate the plenary sessions of the meeting, has contributed two articles discussing preparations for the meeting and more recent practical developments in child protection, as well as education and formation of religious aimed at stopping abuse.

One of these articles, "Preparing the Meeting of Bishops on the Protection of Minors," is already online.

The final articles are from the Gregorian University's Center for Child Protection: "Towards Healing and Renewal" and "The Dignity of Minors in the Digital World."

Safeguarding is the fourth in La Civiltà Cattolica's Perspectives series (only available in English). Each volume retails for US$9.95.