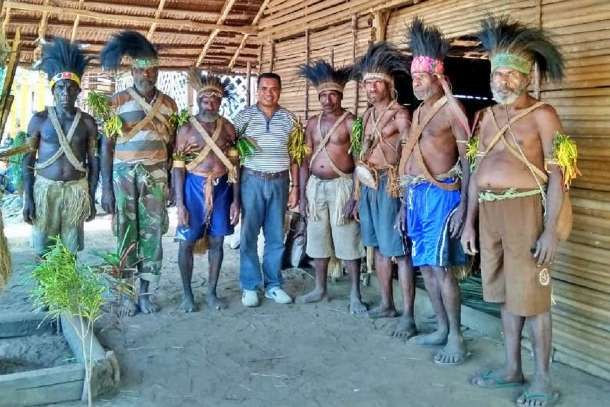 Father Anselmus Amo, 41, is one of the few priests in Papua who have spoken out against violence and abuses being meted out against indigenous Papuans.

The Sacred Heart missionary describes his mission among the indigenous people as representing “the church that has to walk with the marginalized.”

"It is the duty of Christians, especially a priest, to fight against injustice and stand with people who are powerless," he says.

The priest — a native of Lembata, a small island in East Nusa Tenggara province — has served as director of Merauke Archdiocese's Commission for Justice, Peace, and Integrity of Creation (JPIC) since 2014.

He took up the role after the Indonesian government in 2010 launched the Merauke Integrated Food and Energy Estate (MIFEE), which opened up spaces for plantation companies, including some from abroad including South Korea and Singapore, to pursue food self-sufficiency efforts.

In 2019, according to a report by the Pusaka Foundation, a cultural group, more than 1.3 million hectares of oil palm were being farmed in Papua by 52 companies, most of which were encroaching on forest areas.

Such an invasion cannot avoid hurting local communities, Father Amo says. "They lose their livelihoods because the forest is where they make a living."

He says a lack of education and awareness leaves people open to exploitation and accepting money for their land that is well below the real market value.

Sometimes locals have lost their property through blatant land grabbing by companies, he adds.

"We found that in the initial process there was no dialogue at all,” he says, adding that opposition to land acquisitions is often ignored.

The priest admits that from an economic point of view, the presence of a company can see improvements to infrastructure and the amount of money circulating locally.

"However, the price to be paid is too big. Indigenous people are in danger of losing their future,” he says.

As a result, Father Amo has tried to organize communities to protect and keep their land.

"We build awareness by helping them demarcate their land. It makes them more aware of what is theirs and that it can be passed down from generation to generation," he says.

"We also help them make plans for their own economic development," he says, adding communities are encouraged to make sure everything they have is registered, made legal and recognized by the authorities.

"We are trying to convince them a perfectly good life can be lived without the need to give up their and their children’s birthright," he adds.

He says their efforts are paying off as more and more people are committing themselves to hold on to their land and managing it themselves.

Pasifikus Anggojai, 62, a village leader of the indigenous Yei group in Merauke district, says they feel lucky to have Father Amo on their side.

"Some of our lands have been sold to companies, but over the last few years with Father Amo advising us, we have managed to make sure more than 100 hectares of forest still belong to us."

His tribal group of more than 2,000 people inhabits six villages.

Anggojai says the need to defend their land became apparent after seeing many community members who sold their property struggle and a sharp rise in the pollution of nearby rivers.

“The Maro River near our village, where we used to bathe and catch fish, is polluted. Fish can hardly be found and when we bathed there, our bodies itched. Now we are forced to consume water from wells,” he says.

“We are now fully aware of the impacts these companies have, especially with Father Amo's assistance.”

Franky Samperante, executive director of the Pusaka Foundation, says people like  Father Amo are needed amid a growing threat looming over indigenous Papuans.

"People like him help local communities as well as inform the wider public and the government about the problems faced by the tribal people," he says.

"We have worked a lot, which includes investigating acts that destroy people's living space due to company expansion."

Serving in restive Papua, Father Amo needs to be careful. He has not been subjected to any direct intimidation for his activities, but several threats have been made on people he has helped.

"That is certainly a signal that there are always people who don't like what we are doing," he says.

Despite these challenges, he chooses to speak out "because to become the voice of the voiceless is the right thing to do.”

Father Amo believes the Church's voice will have an impact. He pointed to his condemnation of police in May over the death of a tribesman who was allegedly beaten by a police officer. His comments prompted the police chief to meet him to discuss the matter.

"We had a serious discussion where we conveyed our concerns," he says.

The priest believes that by speaking out, he is not only defending the weak but also reminding the perpetrators of the injustice they inflict upon others.

"Many of the perpetrators are also church people," he says.