Dozens of former employees mount long-term protest to win redress for up to 8,000 'unfairly sacked' colleagues 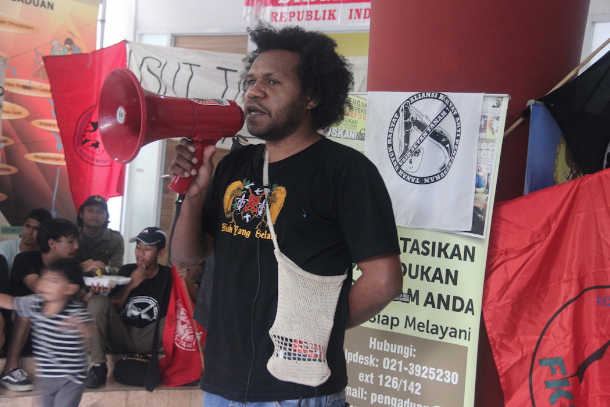 Stephen Yawen, one of the ex workers makes a speech during a protest at the National Commission of Human Rights in Jakarta on Dec. 3.  (Photo by Konradus Epa/ucanews.com)

Tri Puspital's life changed dramatically when mining firm Freeport McMoRan Indonesia "fired" him and 8,000 other workers from its Grasberg mine in Timika, Papua, more than a year ago.

Puspital, 50, has no new income to support his family and the company has not paid him any severance. His health insurance has also been blocked.

Many of his former co-workers find themselves in a similar situation and are struggling to find other work.

He said all were fired when they went on strike in May last year to protest against working conditions, such as having to do 12-hour shifts and the laying off of 10 percent of the estimated 30,000 workforce at the world's largest gold mine and second largest copper mine.

"I was shocked and angry that they blocked my health insurance after having worked there for more than 20 years," he said.

Puspital, who worked as a senior smelting operator for Freeport, said at least 35 of his co-workers have died since the firm terminated their health insurance, because they couldn't afford to pay hospital fees.

Now Puspital has to borrow money from neighbors to pay his children's high school fees. Again, his friends have a similar problem, while others have had to pull their children from school.

"About 40 children have stopped going to school because parents cannot pay their school fees. Two people have even committed suicide," he said.

They have tried asking the company to rehire them, but Freeport flatly refused, saying the workers were deemed to have resigned when they went on strike.

"If they won't rehire us, they should at least give us severance pay," Puspital said.

In desperation Puspital and 40 worker representatives have taken up residence at the Indonesian Legal Aid Foundation offices in Jakarta since August. With the foundation's help they are demanding justice from the company and also the Indonesian government, which has a majority stake in the company.

"We came to Jakarta to seek help from the president," said Puspital, adding that he and 70 friends left Timika and travelled by boat for ten days before arriving in the capital on Aug. 1.

While in Jakarta they have sought meetings with government officials, but apart from seeing president's chief of staff, Muldoko, they have been unsuccessful.

"We will not give up until we get assurances from the government, even if it means we have to sleep on the floor for months, for the sake of thousands of our friends in Papua," he said.

"We have held protests three times already in Jakarta, outside the presidential palace, but no-one is willing to listen to us," he said.

They were told their case was being handled by Ministry of Manpower, but the minister, Hanif Dhakiri, has refused to meet them.

Stephen Yawan, 33, another worker dismissed by the company, said he was praying the government will see reason and help them.

"We were fired because we fought for our rights. It's not fair," he said.

Their legal adviser, Nurkholis Hidayat of the Lokataru Law and Human Rights Office, said the fight has proved dangerous for the workers.

"Ten people were tortured after being arrested at protests, five have been shot and one is still missing," he said.

Freeport Indonesia spokesman, Riza Pratama, said the company has done nothing wrong and has followed all legal procedures.

"What the company has done is in accordance with the guidelines and laws on industrial relations," he said.

Ministry of manpower official John Daniel Saragih said his ministry was trying to help the workers.

"We are thinking of the best solution that can benefit both parties," the director of the ministry's industrial relations department said.