Protesters rally in Seoul to demand an end to Samcheok Blue Power Plant, which they say is destroying the local environment 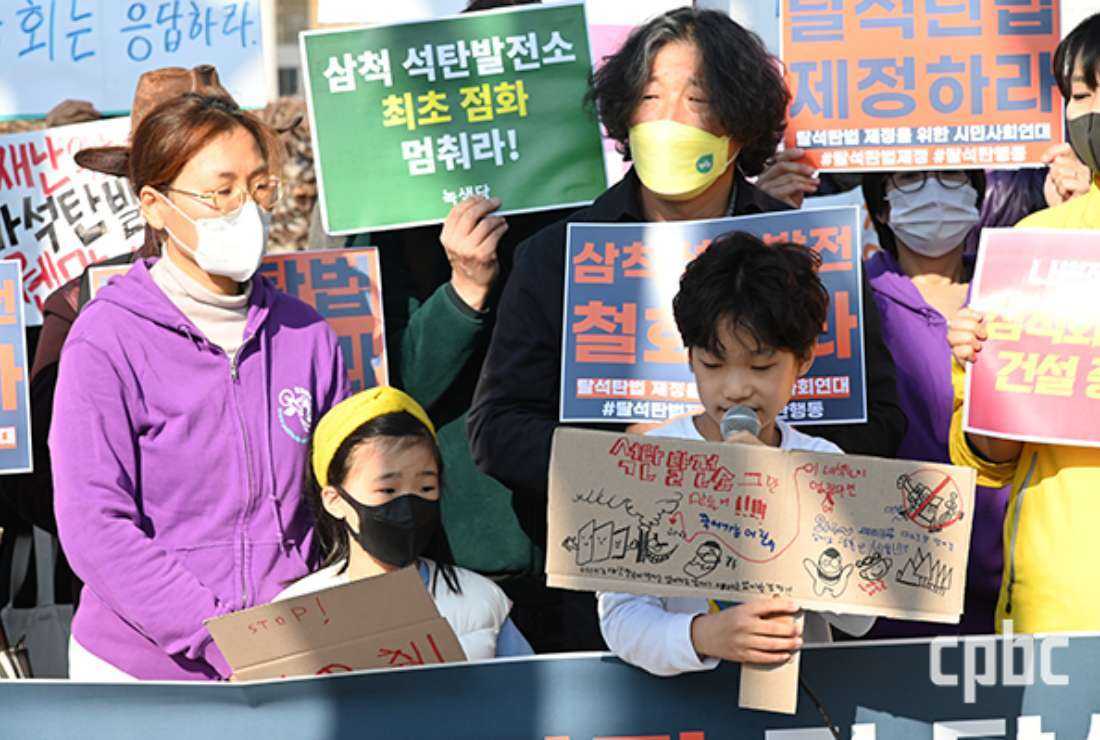 Catholic activists joined by environmentalists and civil society groups held a protest rally in the South Korean capital Seoul to urge the government to shut down the country’s latest coal power plant and enact a coal phase-out law.

The protesters were joined by some young children.

The rally came as the government seeks to commence operations of Unit-1 of Samcheok Blue Power Plant near Samcheok city in Gangwon province on Nov. 30.

A 6-year-old protester, Hannah Kim, called on lawmakers to stop the project which would further deteriorate the environment in Samcheok.

“Coal power plants will send out a lot of greenhouse gases and fine dust, which will make the earth that is still sick even sicker,” Kim said.

“I hate to see the black sky and the black sea. Please save the earth for me and my friends to live on,” she added.

She held a hand-drawn placard with the image of Samcheok’s famed Maengbang beach and sea area which faces erosion due to the power plant operations.

Environmentalists say that the power plant project could cause the beach to eventually disappear because of the construction of a floating dock designed to supply coal to the plant.

He said: “We must live on a planet that grown-ups have thrown away. We, the owners of the earth, shout out. POSCO… stop working at coal power plants right away!”

On the same day in a joint press conference with other activists Sister Cho Kyung-ja, co-president of the Catholic Climate Action group read out the joint statement which pointed out the plight of the people of Samcheok once the power plant starts operations.

“The government and the National Assembly are closing their eyes and ears to the immediate issue of coal power plant construction, even while shouting for a response to the climate crisis and reduction of coal power generation.”

"While the political world turned a blind eye, black smoke began to rise from the chimney of a power plant less than 5 kilometers away from downtown Samcheok from next week,” the statement read.

The activists also stated that once the power plant commences operations, “deterioration in the health of residents due to air pollutant emissions and greenhouse gases are inevitable.”

Earlier, activists had submitted a petition for the enactment of the Coal Phase-out Act with around 50,000 signatures to the National Assembly on Sept. 30.

Following this, at the general meeting of the Industrial Commission on Nov. 21, a petition for the enactment of the Coal Phase-out Act was presented, but details on further discussion on the matter are undecided.

The International Energy Agency (IEA) data shows that the ratio of electricity generation by domestic energy source is the highest for coal at 38.7 percent in 2020. It is followed by nuclear power at 27.3 percent, and natural gas at 25.8 percent.

Only 7.1 percent of the electricity of produced from renewable energy sources which include hydro, solar energy, wind, biofuels, and others. The oil used for power generation constitutes only 1.1 percent of the total.

The Yoon Suk-yeol administration has revised the previous Moon Jae-in administration’s target of generating 70 percent of the energy supply from renewable sources as unrealistic and has instead shifted focus to restoring nuclear power and enhancing energy security.