Families use Our Lady of the Pillar Church in Pilar in Sorsogon Diocese as an evacuation center after being forced out of their homes by Typhoon Ambo. (Photo courtesy of Father Treb Futol)

Guidelines to resume religious gatherings in parts of the Philippines have been criticized as “impractical” and “unreasonable.”

The Inter-Agency Task Force against Covid-19 (IATF) on May 15 released guidelines lifting strict quarantine protocols in Metro Manila and nearby provinces of Luzon, the Philippines’ biggest and most populous island.

They allowed resumption of religious gatherings from May 16 but restricted attendances inside churches to 5-10 people.

“I believe this is just an option. It is impractical to reopen churches for only five to 10 people. The faithful can still maintain hearing online Masses instead of going physically to their parish. Why would we reopen for that number given all the preparations needed?” asked Father Ed Molina of Novaliches Diocese.

Arlene Ocaya, a regular churchgoer, said the government must not only consider the economy but also the spiritual well-being of its people.

“How come malls and private corporations can open but churches can only accommodate five to 10 people? I think the number is unreasonable,” she said.

This is the first time the government has allowed religious gatherings since the enhanced community quarantine began in March.

Churches are also required to place hand sanitizers at entrances and exits as well as foot baths on church steps. Face masks shall also be distributed to worshipers.

Private offices and malls are also allowed to open with only a 50 percent workforce, while companies are advised to arrange employees’ transport as public transport is suspended in the capital.

Government agencies will resume operations on May 18 with only the smallest number of employees to maintain basic functions. 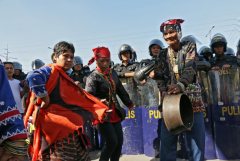 The typhoon made landfall in Samar province on May 14, forcing 141,000 people out of their homes.

More than 1,000 evacuated families are occupying churches and classrooms in Samar province.