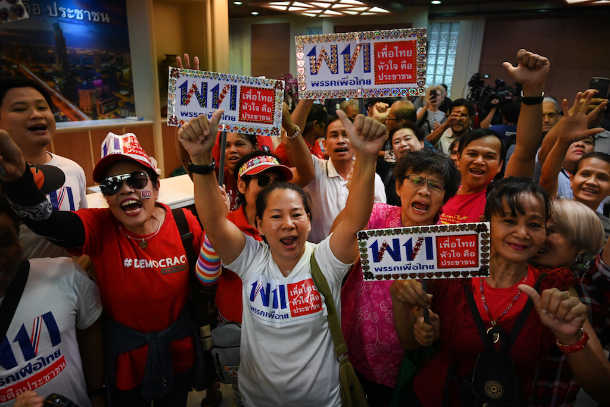 Pheu Thai supporters react at the party's headquarters in Bangkok on March 24 after polls closed in Thailand's general election. Although Pheu Thai won the most seats, it is far from certain that it will head the next government. (Photo by Ye Aung Thu/AFP)

No sooner had Thailand’s first election in eight years wrapped up on March 24 than the shenanigans began — or rather, they resumed.

Preliminary polls showed that the junta-allied Palang Pracharath Party and election juggernaut Pheu Thai finished practically neck and neck, with both then claiming the right to form the next government after five years of military rule.

This being Thailand, however, then came a twist. The junta-appointed Election Commission announced an update four full days after the election: the commissioners chalked up an extra half million votes for the pro-junta party. The updated tally ostensibly made Palang Pracharath the clear winner of the popular vote, though Pheu Thai won the most parliamentary seats.

Numerous observers immediately cried foul over the commission’s report, which was released at a press conference on March 28. Even a cursory glance revealed glaring discrepancies.

These included “a difference in raw votes announced by the commission and its official document released later; numbers of voters not matching numbers of ballots used; and total votes awarded to political parties not matching number of ballots declared valid,” a local newspaper noted. “Voter turnout was 74.69 percent, higher than the initial report of 65 percent, the commission said, without explaining the hike.”

Within hours, the report was then deleted from the Election Commission’s website, adding further fuel to widespread suspicions that the election had been rigged in favor of the junta.

Then again, the point of the election clearly wasn’t to give Thai voters a collective voice in how and by whom their country should be run. Rather, it was to lend a veneer of legitimacy to the ruling generals who seem eager to hold on to power come what may.

The very name of the conservative Palang Pracharath Party, which has nominated junta leader Prayut Chan-o-cha for prime minister, gives the game away, if unwittingly so, by hinting at the party’s entire raison d'etre. It translates roughly as “People’s State Power Party,” which is to say its aim is to perpetuate state power — i.e. the current regime — in the name of the people.

The new government, whatever its composition, will likely not be sworn in until after the coronation of King Maha Vajiralongkorn Bodindradebayavarangkun as Rama X in early May.

In the interim it’s not beyond the realms of possibility that either Pheu Thai or its main coalition partner, the Future Forward Party, a new progressive party popular with young voters, will have been dissolved on a technicality by the Election Commission or one of the country’s courts to clear the decks for the junta-led political alliance.

Powerful flout laws at will

A few weeks ago, Thai Raksa Chart, a pro-democracy party that was expected to do well in the polls was abruptly dissolved by the Constitutional Court for nominating Princess Ubolratana, King Vajiralongkorn’s elder sister, as its candidate for prime minister. It did so on grounds that the party had “dragged” the royal family into politics, albeit the princess is technically a commoner as she was stripped of her royal titles after marrying an American in 1972.

Importantly, nowhere is it spelled out in the country’s latest constitution, which was drafted by the current junta, that she had no right to run for office as prime minister or that a political party had no right to nominate her.

Therein lies a major problem in Thailand, one that overrides the outcomes of elections: the law is often what those in power say it is.

The rule of law, never particularly robust in Thailand, is routinely violated. Meanwhile, the powerful, including people who pass laws and are supposed to uphold them, are known to flout them at will.

Take one notorious example from 2008: then prime minister Samak Sundaravej was forced by the Constitutional Court to step down over abuse of power charges, which largely consisted of him breaking a law that barred office holders from engaging in gainful employment unrelated to their official position.

Samak, a known gourmet, had broken the law, the court ruled, by hosting a cooking show on television.

Such obeisance to the letter of the law could be seen as admirable if it were applied consistently without fear or favor. It’s not.

In this new century alone, the coup-prone Royal Thai Army has unseated two democratically elected governments at gunpoint. In both instances coup makers followed up by ditching the existing constitution and drafting a new one, which in any democratic country would be deemed treasonous acts. In neither case, however, did the generals face any legal ramifications for their actions.

Nor is a highly selective use of laws limited to the political sphere. Ordinary Thai citizens are well aware of the caprices of law enforcement. Having a run-in with the law, even on minor misdemeanor charges, can end in tears for those without money and influence. Meanwhile, those with both money and influence routinely need fear no legal repercussions even for serious crimes.

Tellingly, members of Thailand’s Election Commission have responded to calls by pro-democracy activists to resign over their alleged incompetence and favoritism by threatening to sue critics for defamation. It’s yet another example of people with influence using laws punitively to silence critics.

What ordinary Thais need isn’t just that their votes be respected by the army and its enablers in high places. What they also need is for the rule of law to be allowed to take firm root at last.

Only when the laws are applied equally to all citizens irrespective of their financial and social status will Thailand, “the Land of the Free,” be able to call itself a truly free and just country.

The author is an experienced journalist and long-time resident of Thailand who has been following local politics closely.