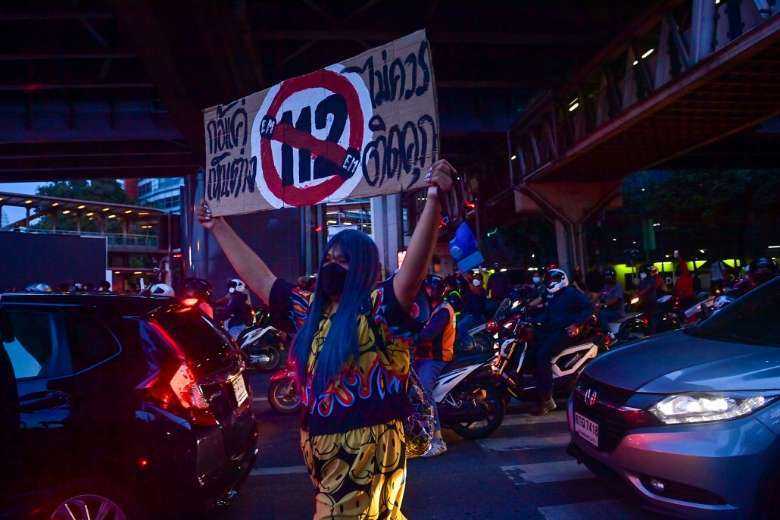 A protester holds a sign during a demonstration in Bangkok on Nov. 14 after a Thai court ruled that speeches by protest leaders calling for royal reforms amounted to a bid to overthrow the monarchy. (Photo: AFP)

Thai authorities appear to have shrugged off calls by rights groups to stop charging citizens with royal defamation as the charges keep on piling up against young Thais critical of the regime.

In the latest case, a 30-year-old woman in the northern province of Phitsanulok has been charged with defaming the monarch after she posted a doctored picture of King Maha Vajiralongkorn on Facebook, according to Thai Lawyers for Human Rights.

The woman, identified only as Warunee, photoshopped a dress onto an image of the Emerald Buddha, a sacred relic in Bangkok, as the king is seen changing the decoration of the idol as per tradition.

She was reported to police by a member of a royalist group that calls itself the Thailand Help Centre for Cyberbullying Victims and which has filed numerous police complaints against pro-democracy activists over their criticisms of the monarchy.

Warunee’s royalist accuser said the image was defamatory and if convicted of the charge of lese majeste the woman could face up to 15 years in prison according to Article 112 of the Criminal Code.

She has also been charged under Section 14 of the Computer Crimes Act for posting content on social media seen as a threat to national security and under Section 206 of the Criminal Code for insulting an object of religious worship.

The woman, who was arrested late last week, denied the charges and her lawyers said she had been suffering from bipolar disorder.

Since November last year, 163 predominantly young Thais have been charged with royal defamation, according to Thai Lawyers for Human Rights.

Thailand’s lese majeste law, which prescribes up to 15 years in prison per offence for statements deemed defamatory of the monarchy, has long been controversial among Thai and foreign rights advocates who say it infringes on basic freedoms such as free speech and freedom of conscience.

The law’s defenders say it is necessary because the Thai monarchy occupies a unique role as a moral authority in the country and any criticism of the institution is a threat to national security.

In recent months, royalist vigilantes have been scouring social media posts by supporters of youth-led pro-democracy movements that have been calling for political reforms, including that of the monarchy, in a country ruled by a military-allied government that seized power in a putsch in 2014.

Half of the 163 current cases of royal defamation have resulted from royalist citizens reporting others to police over public statements or social media posts, according to Thai Lawyers for Human Rights.

“We don’t have any illusions about many people who don’t identify with our cause,” a young pro-democracy activist who studies at a university in Bangkok told UCA News. “They are happy to set the police on us just because they don’t like what we say. It is like in China or North Korea.”