Funeral workers bury a coronavirus victim at Rorotan Cemetery in Jakarta, Indonesia, on July 9. Several funeral workers in Bandung have been fired for charging a Protestant woman to bury her father. (Photo: AFP)

The sackings follow a complaint from Yunita Tambunan, a Protestant woman who accused funeral workers at a cemetery in Bandung district of trying to charge her family 4 million rupiah (US$276) to bury her father.

The row came as the country tried to promote unity with an online prayer event calling for and to the pandemic involving leaders of the country's main religions.

In a social media post, Tambunan claimed she was told that the burial cost for non-Muslims was not covered by the government and she had to pay 2.8 million rupiah after negotiating with them.

She posted a photo of the receipt she said she was given when she paid.

In a written statement, Redy Krisnayana, the head of the funeral team, admitted taking the money but said there was no coercion and he was willing to return it.

From the victim's complaint, it is clear she was charged because they were non-Muslims. Discriminatory practices like this continue

West Java governor Ridwan Kamil said on July 11 that he had fired the graveyard workers and they had been reported to the police.

He said funerals for Covid-19 victims were free of charge and that the workers were salaried.

"We apologize for this incident. It should not have happened," Kamil said.

He said the fired workers also demanded money from Muslims. 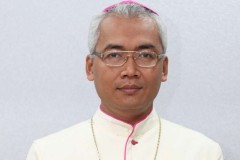 Azas Tigor Nainggolan, coordinator of the human rights desk at the Catholic bishops' Commission for Justice, Peace and Pastoral for Migrant-Itinerant People welcomed the prompt action by the authorities but disputed the claim that Muslims were also targeted.

“From the victim's complaint, it is clear she was charged because they were non-Muslims. Discriminatory practices like this continue. The government needs to recognize that there is discrimination based on religion,” he told UCA News.

Nainggolan said several other people said they were charged after he highlighted the case on Facebook.

Indonesian Communion of Churches spokesman Philip Situmorang said it is hoped that "every element of society will refrain from immoral actions such as seeking profit during this catastrophic humanitarian disaster."

Meanwhile, Indonesians from different religious backgrounds joined an online prayer event on July 11 calling for an end to the pandemic.

“The coronavirus continues to spread. The government cannot work alone in dealing with this issue. All parties must work with each other to face this ordeal,” Widodo told the gathering.

Widodo stressed the need to pray for an end to the pandemic both in Indonesia and around the world.

“In facing this difficult situation, it is necessary for us to say a prayer to ask for God’s help so that the Indonesian nation and the international community will be soon free of this pandemic,” he said.

Qoumas said prayers served as weapons among the faithful that can calm the soul and keep optimism alive.

“We believe that God will help and save all of us … Every disaster happens to remind the people to be introspective and to get closer to God,” he said.

In his prayer, Cardinal Suharyo called for people’s active participation in dealing with the pandemic.

“Encourage the whole nation to take part in creative ways to fight against the coronavirus in accordance with our national leaders’ policies as well as regulations and health protocols,” the prelate said.

“Let us not only think about our own interest. Instead, let us cultivate a spirit of solidarity whose seed God has planted in our hearts. Let this be our national priority.”

The virtual prayer was the second such event held by the government after one in May last year.

Indonesia has seen a spike in Covid-19 cases over the past month, with daily infections exceeding 30,000 during the past week.

Most cases were a result of the Delta variant, which was first detected in India.