A Pakistani Catholic family have notched up their love for the rosary by building the first grotto-shaped house in Lahore.

The entrance to the Rosary Garden house has a sculpted rosary engraved above its brown gate. Another blue rosary is carved near its second gate with a stone Bible inscribed with the first two verses of Psalm 103.

“Bless the Lord, my soul; all my being, bless his holy name! Bless the LORD, my soul; and do not forget all his gifts,” it states.

The brown stones and carved trees make it hard for passersby to miss the house located in Youhanabad, home to more than 50 registered churches and about 150,000 Christians including more than 7,000 Catholics.

Local youngsters often pose for selfies near the double-story building. Since its construction in 2019, the house has been featured on several Christian TV channels.

Imtiaz Bhatti, the Catholic owner of Rosary Garden, even has a dedicated Facebook page for the house with personally written Christian songs and weekly reflections by his elder brother, a pastor.

“The project cost about 600,000 rupees (US$3,820) over four months. A Christian engineer was hired from Sialkot. He only worked at night after some neighbors objected to blocking the road,” Bhatti, a catechist’s son, told UCA News.

“Tiles engraved with 'Mashallah' [God has willed] are common on the houses of Muslims in our country. The rosary is our identity. The unique design bears witness to our mission and struggle as Pakistani Christians.”

More than a million devotees and young people from all over Pakistan usually travel to the shrine in the Catholic village of Mariamabad in Punjab province for the annual pilgrimage during the birthday of Holy Mary in the first week of September. However, Punjab’s government called for Lahore Archdiocese to cancel pilgrimage plans last year because of the coronavirus pandemic. 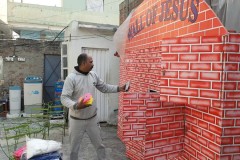 “The period following completion of my master of business administration degree in 2002 was equally dark. Interviewers used to reject my CV because I was a Christian. The staff at a major oil company, where I led the distribution, marketing and sales team, kept a separate glass of water for me. My promotion was delayed on several occasions,” said Bhatti, 44, a father of three.

He says he has helped more than 200 Christian youths to find jobs with companies.

“Despite the challenges of discrimination from the Muslim community, we have to encourage our youth to keep pushing and keep faith in the Lord. The ‘Hail Mary’ was my strong support during the slow progress. We recite it three times a day,” he said.

Church leaders say discriminatory treatment is routinely meted out to Christians, who face a lack of employment opportunities and poor access to education despite their contributions to defense and welfare. Government and army advertisements often offer only menial employment to Christians — for example, sanitation jobs — a stance that horrifies the minority community.

“It’s a true example by a staunch lover of the rosary. It’s a big witness and a source of preaching. Hopefully, it will inspire others to follow a similar trend,” he said.

Houses with Christian symbols are a rare sight in the Islamic republic. Most are recognized by the word “Masih” on name plates. “Masihi” or “Masih” (Urdu for "Messiah") are often added after the names of male Christians when there is no surname and identify them as Christian.

Streets and shops with Christian names are only based in settlements like Youhanabad. Chapels or grottos in the houses of rich Christians are constructed indoors. Unregistered churches are often based in houses.

All churches in Pakistan carry a cross. The famous ones were built during the British colonial era, thus reflecting old English churches with soaring minarets, majestic domes and stained glass windows.

With Christians being the second-largest religious minority in the country, Pakistan’s government has worked to preserve and renovate these century-old churches considered as national monuments.