Special report from our Vatican correspondent 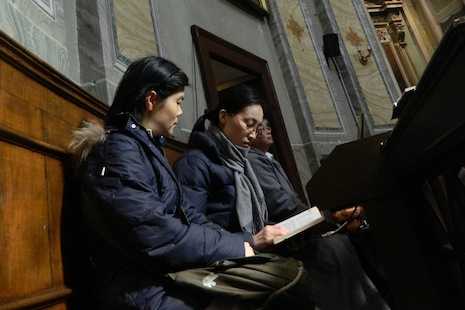 On the afternoon of March 13, Fr Michele Goh stood for hours in the rain in St Peter's Square, waiting for the white smoke that would signal that a new pope had been elected.

“A friend of mine wanted to leave, he was tired and cold. But I had a feeling that we had to stay.”

A few minutes after 8pm, Pope Francis appeared for the first time from the loggia of the basilica. Fr Michele didn't know who Argentinian Cardinal Jorge Bergoglio was. But he was happy when he heard that he had chosen the name of St Francis.

On Easter Sunday, after assisting at Pope Francis' solemn mass at the Vatican, he celebrated for his community in the small church of San Bernardino da Siena.

The frescoed church, in the heart of ancient Rome, a few hundred meters from the Forum, is full during Mass. The congregation is mostly Chinese, but there are also a few Italians, some of them members of mixed families, which is a rare instance here. Two Chinese nuns intone the chants.

Fr Michele baptized four adults during the rite, a sign of the community's slow but steady growth. Almost half the members have converted to Catholicism since arriving in Italy.

The four catechumens are dressed in white after receiving baptism, as tradition requires. At the end of the rite, they invite first their godfathers then the whole community to share a keepsake photo.

Cecilia is one of them. Speaking to ucanews.com during the simple buffet offered by the newly baptized after the Mass, she recounts how she fell gravely ill after arriving in the 'Bel Paese' in 2004.

“My family is not religious,” she says, but during those hard months she was helped by Caritas, the charitable branch of the Italian Church.

“I started feeling the love of God through the people, the Christians that helped me.”

Now, after two years of preparations, she says she is “ready to help others as I was helped in the first place.”

But the economic crisis that has been hitting Italy hard over the past few years has taken its toll on the Chinese Catholic community too.

Chinese in Rome mostly work in the retail sector, running convenience shops or restaurants, or they own small businesses, which have all been suffering from the country's economic slowdown.

“One Chinese family I know has decided to leave and go back to China,” says Francesca De Martino, an Italian lay missionary who studied four years in Taiwan and now works for the Rome diocese. On Sundays, she volunteers to help Fr Michele.

De Martino says that other Chinese families are thinking of leaving Italy. “It's a difficult decision for them. After many years here, they have lost touch with their home country, especially one that's changing as quickly as China.”

But for Fr Michele the election of Pope Francis has brought renewed optimism even among Chinese Catholics.

“We are very happy, he is such a humble, sweet person, so close to the poor,” says Lucia, one of the community's members. “We felt something new with his election.”

For Francesca, the fact that Francis comes from a migrant family – Bergoglio's family moved to Argentina from Italy in the late 1920s – means that he might be closer to “the needs of those who leave their country in search of work,” as most of San Bernardino's parishioners did.

Moreover, she adds, “Jesuits have always understood China, its culture and its tradition. They have always considered them very important.”

Celebrating his first Easter as pope in St Peter's Square, Pope Francis continued what seems to be a characteristic of his pontificate so far: While his predecessors used to recite brief greetings in as many 70 languages from all over the world, the Argentine pope stuck to Italian, in a move that seems aimed at emphasizing his role as bishop of Rome.

But in his “Urbi et Orbi” (to the City and to the World) address, Francis called for “peace in Asia, above all on the Korean peninsula,” asking God that the “disagreements” there may “be overcome and a renewed spirit of reconciliation grow.”