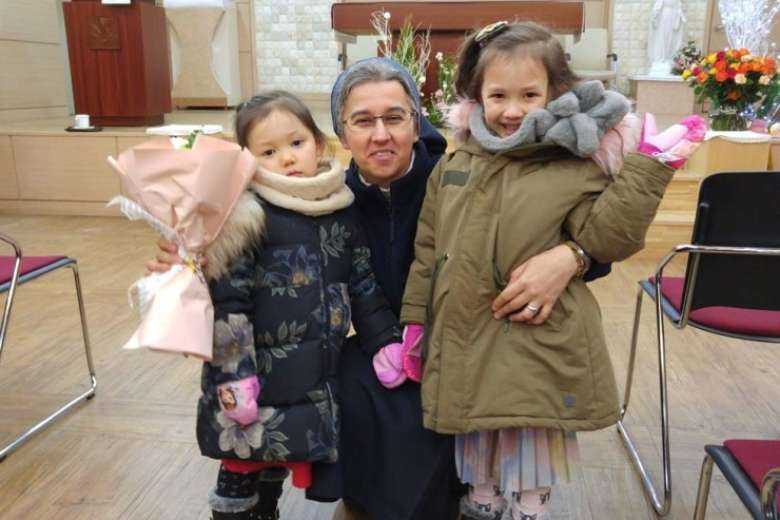 Sister Cristina Evelina Gal with children in Anyang in Gyeonggi province of South Korea. The Romanian nun is among three foreign religious personalities honored for their special contributions to the country. (Photo supplied)

South Korea's government has accorded honorary citizenship to a Romania-born Catholic nun who has served refugees and migrants in the East Asian nation for more than 15 years.

Sister Cristina Evelina Gal, a member of Holy Spirit Missionary Sisters, was awarded Korean citizenship last month in recognition of her contributions to the public interest in Korea, Catholic Times of Korea reported on March 17.

She was among three foreign religious personalities who were honored for their special contributions to the country. The others were Missionary Wesley John Wentworth Jr. from the United States and Venerable Seollae from Nepal.

“It is a special gift from God in the sense that I have lived in Korea and dedicated myself to the people of this land,” 46-year-old Sister Gal said.

Since landing in South Korea in 2007, the nun has devoted herself in spiritual and pastoral services for migrants and refugees to make their lives better in their adopted country.

“I have always wanted to give hope to those who need help,” she said.

When the refugees fell sick, she rushed them to hospitals and supplied them with daily essentials whenever needed

Though the nun had studied theology during her religious formation life, she has been mostly involved in the Church’s ministry for migration and pastoral care, both in Romania and Korea.

After she moved to Korea, she wondered how she could help refugees being a foreigner herself. But she soon realized that as a member of a missionary order, it was “my God-given mission to help them.”

In the past 15 years, Sister Gal has been based in several Catholic dioceses to serve migrants and refugees.

She supported migrant workers and their children at Exodus Center run by Uijeongbu Diocese, Emmaus Study Room in Anyang in Suwon Diocese, and Naomi Center, a pastoral center for migrants, in Jeju Diocese.

On Jeju island she played a leading role in supporting refugees from Yemen who arrived in South Korea in 2018. She and two activists helped more than 500 Yemenis.

In particular, she persuaded local landlords to rent 15 apartments to allow Yemenis to stay. When the refugees fell sick, she rushed them to hospitals and supplied them with daily essentials whenever needed.

Sister Gal lauded Korean Catholics for their warm reception and support to the refugees over the years. “Without their help, refugees like Yemenis would have had great difficulty in settling in Korea,” she said.

Currently volunteering at Naomi Center in Jeju Diocese, Sister Gal noted the war in Ukraine shows anyone can be a refugee and that nations must be ready to accept them.