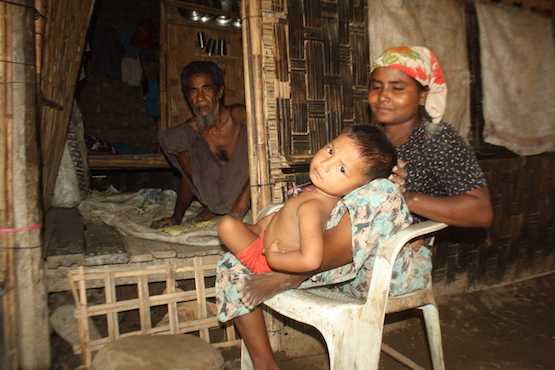 Rohingyas in a refugee camp near Sittwe, the capital city of Rakhine state, April, 2014. (Photo by John Zaw)

The Muslim minority in Myanmar's state of Rakhine self-identify as Rohingya, a term that the country's new civilian government refuses to acknowledge.

The government instead insists on referring to the Rohingyas as Bengalis, implying that the minority group are instead illegal immigrants from neighboring Bangladesh. This is done despite the fact that vast numbers of the Rohingya have lived in Myanmar for decades.

Last month, the U.S. embassy mentioned the Rohingya community in a statement of condolence for the more than 20 people who died after a boat sunk off the Myanmar coast.

This sparked a protest outside the U.S. embassy in Yangon, which was led by nationalist groups, including hard-line Buddhist monks, who denounced the use of the word Rohingya.

Myanmar's Ministry of Foreign Affairs, where the country's de-facto leader Aung San Suu Kyi is also minister, asked the U.S. to refrain from using the term because it does not assist the country's national reconciliation efforts.

This has escalated criticism of the Nobel Peace laureate whose once-sainted reputation has subsequently been tarnished. Observers say her National League for Democracy government are apparently bowing to nationalist groups who oppose the rights of the Rohingya in the predominantly Buddhist country.

Hard-line Buddhism has emerged since violence occurred in Rakhine during 2012. Spearheaded by ultra-nationalist monks from the Committee of Protection of Race and Religion, known as Ma Ba Tha, they successfully lobbied the previous military-backed government impose laws that targeted the Rohingya.

U Parmaukkha, a prominent nationalist monk from Magway Monastery in Yangon, said that the U.S. embassy's use of the term Rohingya impacts negatively on Myanmar's development because the Rohingyas are not included in the country's official 135 ethnic groups.

U Parmaukkha said the U.S. is "interfering in Myanmar's sovereignty."

"I call on the new government led by Aug San Suu Kyi to reveal publicly that the Rohingya are not in the country. There will be large protests if it fails to do it," U Parmaukkha who is also a member of Ma Ba Tha, told ucanews.com.

Scot Marciel, the U.S. ambassador to Myanmar, said May 10 that the U.S. would continue to use Rohingya as it is international practice to recognize communities by the name they would prefer. Some of the 500 people from nationalist groups who took part in an anti-Rohingya protest in Mandalay, May 13. (Photo by John Zaw)

Khine Pyi Soe, vice president of the Arakan National Party, a popular hard-line Buddhist party in Rakhine state, said that the use of Rohingya as a term could fuel tensions within Myanmar.

"I think that the U.S. might use Rohingya as it is familiar term among the international community but inside the country, it is a sensitive one," Khine Pyi Soe told ucanews.com.

Khine Pyi Soe said that the National League for Democracy-led government has a lot at stake over the issue.

"If the government makes missteps on the Rakhine issue, it may lose public support and affect the next election in 2020," claimed Khine Pyi Soe.

Aung San Suu Kyi has been criticized for her silence on the Rohingya issue and for her lack of details on how the new government will protect the rights of the Muslim minority.

Neither the military-backed previous government nor the National League for Democracy accepts the status of the Rohingya. Instead they have insisted that there are no Rohingya in Myanmar.

Win Naing, a regional lawmaker with the National League for Democracy in the Thandwe constituency, Rakhine, acknowledged it is a complicated matter.

"The new government would need to find a solution and consider how best we can deal with this delicate issue as it is not possible to push them [the Rohingya] out of the country," Win Naing told ucanews.com.

Kyaw Hla Aung, a Rohingya activist from the Thetkaepyin refugee camp near Sittwe, voiced his concerns about the administration if it continues to bow to nationalists.

"The truth may not prevail if the government ignores history. The new government's ignorance is tarnishing its reputation," Kyaw Hla Aung told ucanews.com.

Kyaw Hla Aung insisted the Rohingyas are a part of Myanmar's history. He described how his father's identity card mentioned "Rohang" which means a person of the Rohang, an old Muslim term used in what is now the Arakan state of western Myanmar.

Rohingya, are seen by rights group as one of the most persecuted minorities in the world. They have lived in Myanmar for generations but currently there are over 1 million of them who are stateless in Rakhine. They have been denied citizenship, freedom of movement, education and health care.

More than 150,000 Rohingyas have been confined to camps in apartheid-like conditions since 2012 when sectarian violence between Rakhine Buddhists and Rohingya Muslims left scores of people dead.

Due to dire conditions in the camps, thousands of Rohingyas have taken perilous boat journeys in the hope of finding a new life in Malaysia and Thailand. Traffickers have subjected many of the refugees to horrific abuses. Hundreds, maybe thousands, have perished at sea.