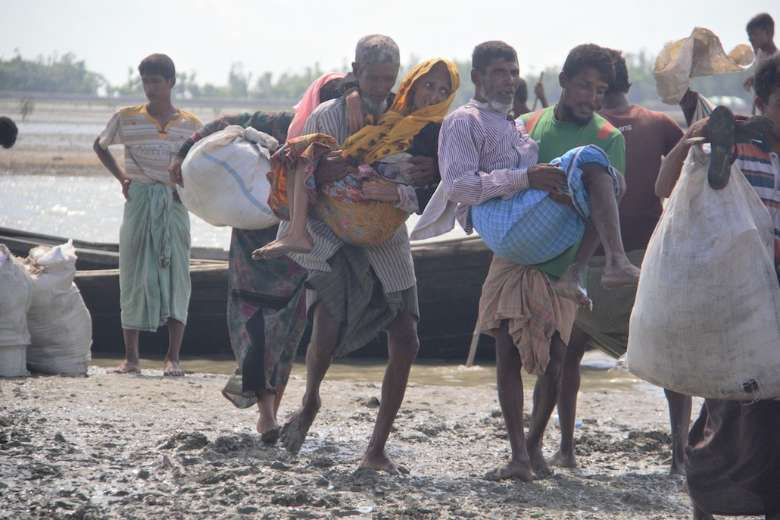 Rohingya refugees in Bangladesh are demanding a safe return to their homeland of Myanmar.

Despite a ban on gatherings due to Covid-19, they observed Rohingya Genocide Remembrance Day on Aug. 25 by praying for the souls of their dead relatives, holding small rallies and posting their demands on social media.

“We prayed for the eternal peace of the souls of our relatives killed by the Myanmar army and we raised our demands in the camp with a few banners,” Gani told UCA News.

“What will we do in the Bangladeshi camps? Although the Bangladesh government and NGOs are providing us food and shelter, we have no future here. If we stay here, our quality of life will not change.”

Rohima Begum, 36, lives in the Balukhali camp with her husband and four children in a small room.

I am getting food three times a day here, but it is better to live by eating twice in my own country

“First, I want justice for my killed parents, brothers and sisters,” she told UCA News.

“We want to return to Myanmar with dignity, to live on our own land in our own country. I am getting food three times a day here, but it is better to live by eating twice in my own country.

“I have three sons and a daughter. None of them are studying here. If they were in our own country, at least they could study there. We hope that world leaders and the United Nations will play a leading role in getting us justice.”

Bangladesh's talks with Myanmar on Rohingya repatriation have been delayed since February’s military coup in Myanmar. Bangladesh's state minister for foreign affairs Shahriar Alam told BBC Bangla on Aug. 25 that Bangladesh's progress on the issue had stalled due to the changing political situation in Myanmar.

“Bangladesh will now raise the issue at the UN General Assembly next month to increase international pressure on Myanmar,” he said.

"Unfortunately, the UN is only working with the UNHCR and the International Organization for Migration to take care of the Rohingya. The UN has not yet played a good role in Rohingya repatriation. We are not very optimistic that it will be able to do so in the future."

Macel Ratan Guda, director of the emergency response program of Caritas Bangladesh in Cox’s Bazar district, said: "Although this is a diplomatic issue, we do not see any possibility for the Rohingya to go to Myanmar now that the military is in power.”

Although some NGOs are claiming they are not getting funds to help the Rohingya like before, Caritas says its activities are normal.

However, the director of another NGO told UCA News on condition of anonymity that its funds had dropped by 40 percent and it had been forced to lay off staff.

“In this situation, the government of Bangladesh should work with the international community to put pressure on Myanmar to ensure the future of the Rohingya by returning them to their homeland with dignity,” he said.

Since Aug. 25, 2017, more than 742,000 Rohingya have fled to Bangladesh, according to the United Nations refugee agency UNHCR.