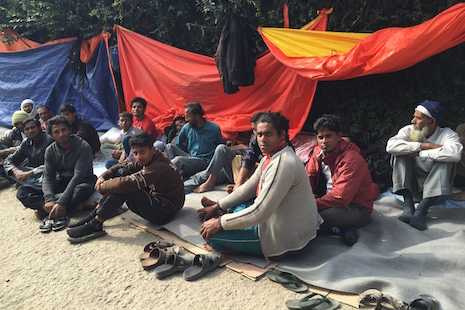 Refugees and asylum seekers gather outside the offices of the U.N. Refugee Agency in Kathmandu for an ongoing sit-in protest. (Photo by Pragati Shahi)

Just outside the office of the United Nations Refugee Agency in Kathmandu, people from conflict-torn countries in Asia and Africa have been staging sit-in protests.

But with a surge in refugees around the world, there may be few answers to their problems, leaving many stranded in a country that calls them illegal migrants.

The front gate of the U.N. agency’s building has been a protest site for refugees and asylum seekers since Oct. 27. These include people from some of the world’s most persecuted communities: Rohingya from Myanmar, Ahmadis from Pakistan, Hazaras from Afghanistan. The protesters — roughly 50 have turned up each day — have fled their homes in eight countries in Asia, Africa and South America.

The gates of the U.N. Refugee Agency were the only option left for these so-called "urban refugees," since the government of Nepal refuses to issue refugee status to asylum seekers from places other than Tibet and Bhutan.

Now, these urban refugees are facing further hardship, after the U.N. Refugee Agency slashed its subsistence allowances by 25 percent, to the equivalent of about US$55 a month. And by January 2016, the allowances will stop altogether.

"Our life was not easy before in Nepal … now, life has become unbearable," said one of the protesters, Yasin Hamdani, 30, a member of the persecuted Rohingya community who fled Myanmar in 2012.

He said the Nepalese government treats him like an illegal migrant, with no job options or aid. The country’s devastating April earthquake, and now an ongoing fuel blockade, have left him and others in a deeper hole.

The U.N. Refugee Agency, or UNHCR, estimates there are about 550 urban refugees and asylum seekers in Kathmandu, with about 110 from Myanmar. Most of the Myanmar urban refugees are from the Rohingya community in Rakhine state.

"We were told that this office is the only place we have to help us find a solution to our problems," said Hassan Hassan, 26, another Rohingya who came to the agency’s office in Kathmandu in search of his missing parents after a sectarian riot in 2012 tore through his hometown in Maungdaw, Rakhine state.

"We were told that the UNHCR is the responsible agency to provide us international protection and help us survive. When we had no options left, we decided to organize a sit-in protest in front of the office to draw attention," Hassan said.

Hassan said he was the first Rohingya asylum seeker to be granted refugee status by the U.N. agency in Nepal. Despite this, however, his chances of being settled in a more prosperous country are far from certain. Hassan Hassan, 26, wearing a red shirt, said he has been granted refugee status but his future is still uncertain. (Photo by Pragati Shahi)

A shortage in funding and a surge in displacement around the world mean that resources for people like Hassan are dwindling.

"We have been informing the refugee community as early as 2014 about the changing global policy on refugees," said Deepesh Das Shrestha, assistant external relations officer with the agency in Kathmandu. "There are other major emergency refugee situations in other parts of the world that need immediate attention."

In the meantime, the agency has been forced to ration its resources for the urban refugees, Shrestha said. However, even though the regular allowances will stop for most people, refugees with specific needs — disabilities, medical problems, single women or the elderly — will continue receiving payments, while children will also get a modest educational allowance until the 10th grade.

A major problem, refugee advocates say, is that Nepal has not signed on to the 1951 Refugee Convention and has no national legal framework to deal with the burgeoning refugee crisis.

Caritas Nepal, part of the social services arm of the Catholic Church, has been helping Bhutanese refugees in Nepal. Still, even Bhutanese refugees — who, unlike Myanmar Rohingya, are actually recognized by the Nepalese government — face problems.

"Even the fate of thousands of Bhutanese refugees who are awaiting third-country resettlement is unpredictable as the Nepal government is still unclear on what to do with them," said Sylvia Gurung, who coordinates Caritas Nepal’s Bhutanese refugee education program.

"Their future is uncertain," she said.

For non-Bhutanese refugees like Hassan, the situation is more tenuous. The government of Nepal refuses to acknowledge them as refugees, despite their U.N. status.

"They are illegal migrants," said Laxmi Dhakal, joint secretary at the Ministry of Home Affairs, which manages refugee affairs.

This is not the answer Hassan and his friends want to hear.

"So, this means we should die of hunger here as we are not anyone’s priority," Hassan said.