Leaders say they want to go back to their original villages in Rakhine state of Myanmar, not to camps 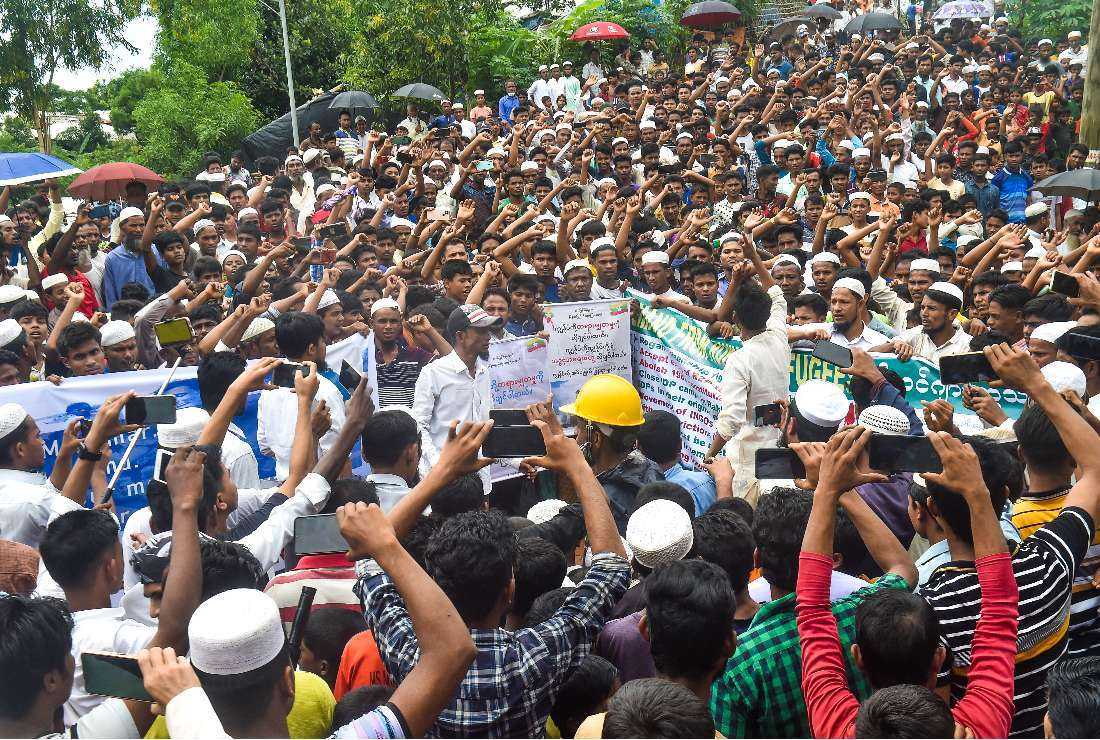 Tens of thousands of Rohingya refugees in Bangladesh staged demonstrations on June 19 demanding repatriation back to Myanmar, where they fled a brutal military crackdown five years ago.

Almost a million Rohingya are confined to bamboo and tarpaulin shacks in 34 squalid camps in southeast Bangladesh, with no work, poor sanitation and little access to education.

Their increasingly restrictive host country has banned them from holding rallies since they staged a massive 100,000-strong protest in August 2019.

But authorities allowed several groups of Rohingya to hold simultaneous "Go Home" marches and rallies ahead of World Refugee Day on June 20.

"We don't want to stay in the camps. Being refugees is not easy. It's hell. Enough is enough. Let's go home," Rohingya community leader Sayed Ullah said in a speech at one rally.

In 2018, investigators from a United Nations fact-finding mission into the killings and forced mass exodus of Rohingya Muslims in Myanmar concluded that a criminal investigation and prosecution was warranted of top Myanmar generals for crimes against humanity and genocide.

The latest demonstrations come after the foreign secretaries of Bangladesh and Myanmar last week held a meeting — their first in nearly three years — by video conference.

A Bangladesh Foreign Ministry official told AFP that during the meeting Dhaka pressed Naypyidaw for the repatriation of Rohingya refugees to start this year.

"We are hopeful the repatriation will start after the monsoon this year at least in a limited scale," he said on condition of anonymity.

Police said thousands of refugees, including young children, joined the marches and rallies, standing on roads and alleys with placards that read "Enough is Enough! Let's Go Home".

"Over 10,000 Rohingya took part in the rally in the camps under my jurisdiction," police official Naimul Haque told AFP, referring to Kutupalong, the largest refugee settlement in the world.

Police and organizers said more than 1,000 Rohingya took part in each of the rallies in at least 29 camps.

"We are Rohingya, not Bengalis. We want repatriation with full rights restored"

Authorities deployed extra security in the camps to prevent any violence, Haque said, adding that the demonstrations passed off peacefully.

Previous repatriation attempts have failed, with Rohingya refusing to go home until Myanmar gives the largely Muslim minority guarantees of rights and security.

With a dialect similar to that spoken in Chittagong in southeast Bangladesh, the Rohingya are seen by many in Myanmar as "illegal immigrants," a characterization the community does not agree with.

Rohingya leaders say they want to go back to their original villages in Rakhine state of Myanmar, not to camps that Myanmar's government has built for internally displaced people.

Refugee Rahmat Ullah, 69, said he wants to go back home. "We are Rohingya, not Bengalis. We want repatriation with full rights restored," he told AFP.

Young refugee Mohammad Haris said he does not want to die a refugee. "I want my rights. I want to go home where I can study and think of a future," he said.