Rohingya refugees hopeful the pope will keep his promise A Rohingya woman outside her makeshift shelter made of mud and discarded plastic sacks tries to escape the midday heat. As of Dec. 3, there were 626,000 displaced people in refugee camps in Bangladesh's Cox's Bazar. (Photo by Joe Torres)

Expectations are high among refugees in makeshift camps in Cox's Bazar days after Pope Francis met with 16 Rohingya refugees in Dhaka, the capital of Bangladesh.

On his way back to the Vatican, the pontiff admitted he wept during his Dec. 1 encounter with the Muslim refugees who have fled from religious persecution in Myanmar's neighboring Rakhine State.

"I have told the pope about what we have been through," 25-year old Sayeda Khatun told ucanews.com in the Rohingya language on Dec. 4.

She said Pope Francis assured her that "he would do everything possible to help us and to bring a peaceful solution" to the conflict in their homeland.

In an earlier interview after meeting the pope, the refugees said the pontiff promised to convince world leaders to help ease the tension in Rakhine State.

Foyez Ali Majhi whose village was razed to the ground by soldiers said the pope assured them that he would try to help get justice for the Rohingya.

According to the refugees, Pope Francis promised to convince world leaders to help facilitate an end to the persecution of the minority group, which number about 1.1 million.

He also vowed to tell the stories of their persecution on the international stage as he reiterated his appeal for continuous support for those living in refugee camps. A Rohingya woman and her child on their way to fetch water from a nearby water pump stand on a hill overlooking the Kutupalong refugee camp in Bangladesh on Dec. 3. (Photo by Joe Torres) 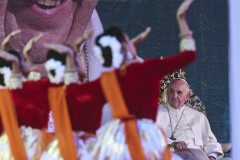 Although many in the refugee camps told ucanews.com they didn't know who Pope Francis was, they smiled when they were told about the pontiff's promise to help them.

Muhammad Abu Sayed, one of the leaders at the Nayapara refugee camp who met the pope, said people were eager to hear about their meeting.

The 35 year old from Maungdaw in Rakhine said the pope, aside from promising prayers, vowed to "work with world leaders and do whatever possible" to help the Rohingya.

"He said he would intervene so that we can live in peace in Burma (Myanmar)," Abu Sayed told ucanews.com outside his makeshift shelter in the middle of the camp.

He said the Rohingya "have great faith in Pope Francis and they believed in what the pope has promised to do."

"We expect that Pope Francis … will be able to bring an end to the plight of the Rohingya and help us get back home, and live in peace," he added.

He said he told the pope the Rohingya fled Myanmar "to save our lives."

Abu Sayed arrived at the refugee camp on the outskirts of Cox's Bazar in October after soldiers and extremist Rakhine Buddhists attacked his village and raped women.

"We have lost our homes and we have nowhere to go," he said, adding that before reaching Cox's Bazar after crossing a river into Bangladesh, he and his neighbors had moved from one village to another.

"We didn't want to leave but we were forced to do so to save ourselves," he said.

When the pope asked if he would be interested in going back home, Abu Sayed said the Rohingya will only go back if they are granted citizenship and their security is assured.

He said they also want to be compensated for the destruction of their homes and property.

"If we are repatriated, we must be settled in our own village not in any other place," he said, adding that they also demand justice for the killings, torture and the rape of women.

"All those responsible must be brought to justice. The mosques and madrasas or Islamic schools that were destroyed must be rebuilt," he said.

He also called for the release of all illegally-detained Rohingya and those in camps for internally displaced people in Myanmar.

"There should be no restriction on movement of the Rohingya," said Abu Sayed, adding that educated Rohingya men and women should be granted a quota of government jobs.

"We don't trust the government (of Myanmar) because it cheated us (and) forced us to become refugees," he said. Refugees walk under the heat of the noonday sun on a trail in the middle of the Kutupalong refugee camp in Bangladesh on Dec. 3. (Photo by Joe Torres)

Pope Francis' meeting with the 16 Rohingya refugees was seen as a symbolic gesture of solidarity with the Muslim minority who have been persecuted for their religion.

"I wept, I tried to do it in a way that it couldn't be seen. They wept too," said the pontiff during his flight back to Rome on Dec. 3. "I told myself 'I cannot leave without saying a word to them,'" he added.

"In the name of all those who have persecuted you, who have harmed you, in the face of the world's indifference, I ask for your forgiveness," he told the refugees the day before.

The International Organization for Migration (IOM) in its "inter-sector coordination group" report released on Dec. 3 said 626,000 new refugees arrived in the camps in Cox's Bazar between Aug. 25 and Dec. 2 this year.

There were 1,622 arrivals alone in the week ending Dec. 2. The Bangladeshi Immigration and Passports Department has registered 730,654 Rohingya through its biometric registration system.

Bangladesh's Social Services Division has identified 36,373 separated and unaccompanied minors among the refugees who have arrived since August.

The IOM said "the speed and scale of the influx has resulted in a critical humanitarian emergency" especially because the people who have arrived in Bangladesh came with very few possessions.

The refugees rely on humanitarian assistance for food and basic services are under severe strain due to the number of people, especially in the Kutupalong and Nayapara refugee camps.

Many shelters and tents, which have sprung up in recent weeks, have no water and sanitation facilities. Lack of roads also limit access to these new camps, preventing aid reaching people.