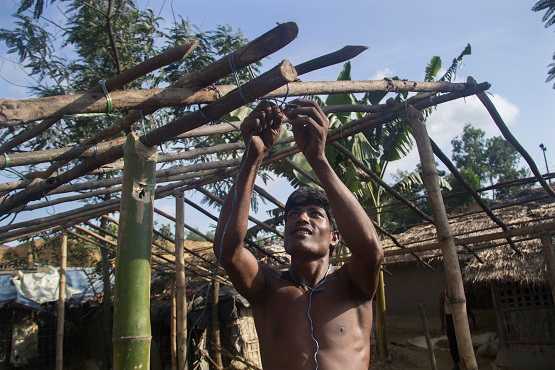 Rohingya refugees living in squalid, unregistered camps in Bangladesh are bracing themselves for cyclones and heavy downpours as monsoon approaches.

Some 32,000 registered refugees reside in two official camps in Cox's Bazar while up to half a million live in more than half a dozen overcrowded, informal camps nearby. The figure swelled due to a fresh round of persecution in Myanmar beginning in October 2016.

The killing of nine police officers at three border posts in northern Rakhine State on Oct. 9, 2016 sparked the crackdown that caused more than 75,000 Rohingya to flee to Bangladesh. Reportedly, the operation left about 600 killed, dozens of women raped and Rohingya villages burnt down.

Refugees in Bangladesh have borne the brunt of seasonal storms and heavy rain over the past week. In Bangladesh, monsoon season is May to September.

"It's been raining for seven days causing over 1,000 mud houses to collapse, tarpaulin sheets have been torn down letting in water when it rains. Many refugees are sharing their neighbor's houses because they have nowhere to go," Abu Sayed, a Rohingya community leader in Kutupalong unregistered camp told ucanews.com.

Syed, who moved to Bangladesh in 2007, said the camp has received over 30,000 new refugees since October 2016. The weather has been causing havoc, he said.

"New refugees are facing serious accommodation and food problems. We have lived here for years so we can make a living working outside camps but they know nothing. They don't have enough to eat and they can't fix their broken houses," he added.

Muhammad Noor, another Rohingya leader from Kutuplaong said international aid groups like the United Nations Refugee Agency, World Food Program, International Organization for Migration, and some local Bengali people have offered assistance but it is insufficient.

"Aid groups provided tarpaulin sheets for refugees but only 40 percent of people received them. World Food Program, provides 25 kilograms of food per family per month but given that a family has 8-9 members the amount is insufficient. Over 30 percent of refugees, mostly the new ones, don't get the aid and rely on generosity of others or are begging for survival," Noor told ucanews.com.

Noor said that the stream of new arrivals has stemmed over the past month, as Rakhine seems relatively peaceful, while several thousand have returned home.

"Several thousand have returned to Rakhine, especially those who came on their own, leaving their family behind while a few hundred have left fearing the Bangladesh government's plan to relocate refugees to a remote island," he said. In late January, the Bangladesh government said it planned to relocate Rohingya refugees to a remote, uninhabited and flood-prone island, sparking fear, tension and outrage among refugees as well as rights groups.

"Those still living in the camps have possibly lost everything like houses and property in the crackdown. They also faced or witnessed abuse and are too traumatized to return," said Noor.

An official from the World Food Program, who asked not to be named, said the agency is trying to help the refugees despite government restrictions.

"We help the refugees although we know the government doesn't have a favorable attitude toward them. We are making maximum strides but the number of refugees outnumbers our capacity to assist," the official said.

Bangladesh is located in the floodplains of world's largest river delta system that empties into the Bay of Bengal. The geographic position and an increasingly volatile nature caused by climate change make the poor South Asian nation vulnerable to natural disasters like cyclone, tidal surges and flooding.

Weather experts predict cyclones and heavy downpours as monsoon season nears, raising fears for the refugees living in Cox's Bazar, which is located at the mouth of Bay of Bengal.

"Usually, April-May and October-November are most vulnerable periods for cyclones, and there is a possibility of two or three cyclones this year. From March it has rained heavily, the highest rainfall in 10 years," A.K.M. Nazrul Haque, a meteorologist from state-run Meteorological department in Cox's Bazar told ucanews.com.

Possibilities of cyclone and heavy monsoon rain put the lives of refugees at stake, he said.

"Refugees live where waterlogging during rainy season is a huge problem, given that it sometimes rains for up to 25 days in Cox's Bazar. A major cyclone could crush all the mud houses and even destroy hills causing a fatal mudslide," Haque added. Across the border in Myanmar's Rakhine State, many Rohingya in internally displaced person (IDP) camps likewise have concerns.

Khin Mg Myint, a Rohingya man who resides in Thetkaepyin IDP camp near Sittwe, the state's capital, told ucanews.com that there is no emergency response preparedness in the camps for adverse weather conditions.

"If a powerful cyclone hits Rakhine, the people in the camps face a risky situation," said Khin Mg Myint who has lived a camp since 2012.

The first cyclone of the year, Maarutha, made landfall in Rakhine during April but it was not severe and there was no damage experienced in the Rohingya IDP camps.

Furuk, a Rohingya from Dar Paing IDP camp near Sittwe, said that there are some cyclone shelters in his camp but they were damaged because of Cyclone Komen in August 2015.

"No preparations have been made in the camps but the UN and some NGOS helped rebuild some of the damaged shelters but people have no idea what to do when a cyclone affects the IDP camps," said Furuk.

A quarter of temporary shelters in 24 camps were damaged and more than 21,000 displaced people affected when the cyclone Komen swept across Rakhine state in western Myanmar in August 2015 according to the United Nations.

Tun Lwin, prominent meteorologist in Myanmar, said that the cyclone could happen in the Bay of Bengal during May so precautions need to be taken.

"Unit the end of May, we need to be alert and keep observing on weather conditions as flooding, thunderstorm and strong winds could happen in the evenings," Tun Lwin, a former director general of the Myanmar's Meteorology and Hydrology ministry, told ucanews.com.

Rakhine state has been declared one of four 'natural disaster zones' by the Myanmar Government, alongside Chin State and Sagaing and Magway regions.