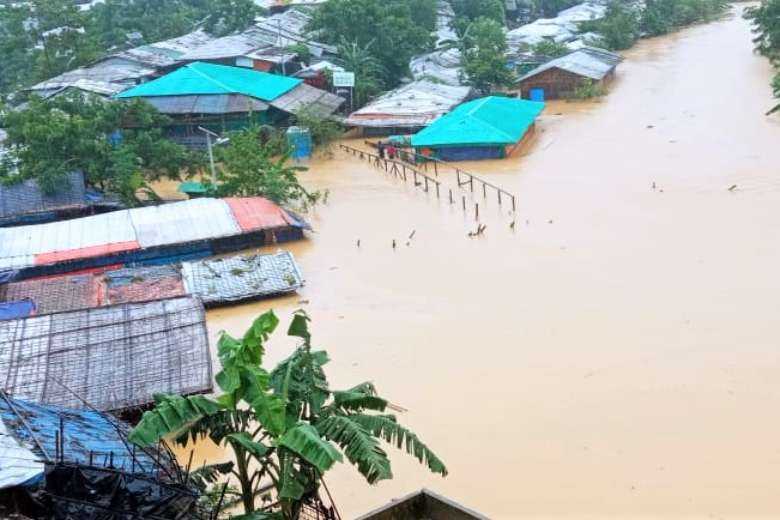 A view of a flood-hit Rohingya refugee camp in Cox's Bazar district. At least 14 people including six refugees have died in flash floods and landslides in the district. (Photo courtesy of Caritas Bangladesh)

The Bangladeshi government and aid agencies have stepped up humanitarian responses after deadly flash floods and landslides killed at least 14 people including six Rohingya refugees in Cox’s Bazar district.

The disaster triggered by heavy monsoon downpours inundated refugee camps sheltering thousands of Rohingya Muslims as well as other parts of the district on July 27, officials said.

Six Rohingya refugees, including four members of two families, were killed and at least two others were injured in the landslide, according to Mohammad Shamsud Douza, additional commissioner of the state-run Refugee Relief and Repatriation Commission (RRRC).

“Heavy rains on Tuesday afternoon caused landslides in refugee camps and six Rohingya, including women and children, died on the spot after two or three settlements on the slopes of the hill were buried. Several people were injured,” Douza told UCA News.

The official said local people, volunteers and law enforcers staged a rescue operation and pulled out many people trapped under heaps of mud, adding that thousands have been evacuated to safety.

We were so afraid when it started to rain heavily. We saw some shelters collapse due to landslides and go down under floodwater

All affected refugees will get necessary aid, he added.

Mohammod Ali, 35, a Rohingya from Balukhali camp, said he fled his shelter with his family to avoid disaster.

“We were so afraid when it started to rain heavily. We saw some shelters collapse due to landslides and go down under floodwater,” Ali, head of an eight-member family, told UCA News.

He said that his family are now sheltering at a school in the camp but they are hungry as they have left everything in their shelter and there is no place for cooking.

“We need food and after the rain is over we need to return to a shelter in a safe place,” Ali added

Pervez Chowdhury, a government officer in Teknaf of Cox’s Bazar, said they have been informed about the deaths of five members of the same family in a village due to a landslide caused by heavy rain.

“We will take necessary steps to assist the affected people after reaching the spot and observing the situation,” he said.

Another three people died in other parts of Cox’s Bazar, a local source confirmed.

A staff member from Catholic charity Caritas Bangladesh, which operates in refugee camps, told UCA News that the agency will start distributing aid to affected people from July 29 and initiate rebuilding shelters after assessing the damage.

We have informed our funding partners that we need emergency support

“There were warnings about heavy rain and we had adequate preparations, but the situation got worse and damage was much higher. Our warehouse has been damaged. We have opened emergency shelters for victims,” Inmanuel Chayan Biswas, head of operations at Caritas' emergency response project, told UCA News.

“We have informed our funding partners that we need emergency support.”

Cox’s Bazar district is home to about one million Rohingya refugees from Myanmar who mostly fled their homes in Rakhine state across the border to avoid a brutal military crackdown in 2017.

The refugees are sheltering in some 30 camps, mostly located on what once used to be hilly, forested areas, making their makeshift shelters vulnerable to flooding and landslides.