After losing their migration routes to forest clearances, elephants in Bangladesh pose a deadly danger to displaced people A vendor sells items to people beneath a road sign reading "Elephant Crossing Point" near Kutupalong in September 2017. Elephants have killed 13 people in camps since August 2017. (Photo by Piyas Biswas/ucanews.com)

They crossed the border into Bangladesh from Maungdaw in October last year with two daughters and a son to find sanctuary at Kutupalong refugee camp in Cox's Bazar, which now shelters about 400,000 Rohingya.

But the family's dream of starting life all over again came crashing down on Jan. 19 when a wild elephant trampled 45-year-old Yakub to death and destroyed their makeshift tent.

"We were woken by the screaming of people nearby and, before we realized what was going on, a huge elephant smashed our tent. My husband died in the attack and I got injured while fleeing with the children," Anwara, 40, told ucanews.com.

Yakub was the sole breadwinner for the family as a day laborer for humanitarian groups supporting up to one million refugees huddled in overcrowded camps in Cox's Bazar.

"Now we are surviving completely on mercy relief from aid groups," Anwara said.

About 300,000 refugees were in the area before August 2016. The two crackdowns forced an exodus of more than 770,000 Rohingya to Bangladesh, according to the United Nations Refugee Agency (UNHCR).

The massive influx of Rohingya saw more than 1,200 hectares of forest land cleared for shelters for refugees in Cox's Bazar, Bangladesh's most popular tourist destination thanks to the world's largest unbroken sea beach.

Cox's Bazar's Ukhiya and Teknaf subdistricts are known for lush green coastal forests and natural habitats for rare wildlife species including birds and Asian elephants. Ukhiya and Teknaf houses all the refugee camps and they cut through the crossing points and migration routes of elephants from Myanmar to Bangladesh and vice versa.

This human-elephant conflict has seen 13 refugees killed in elephant attacks since August last year, according to the International Union for Conservation of Nature (IUCN). 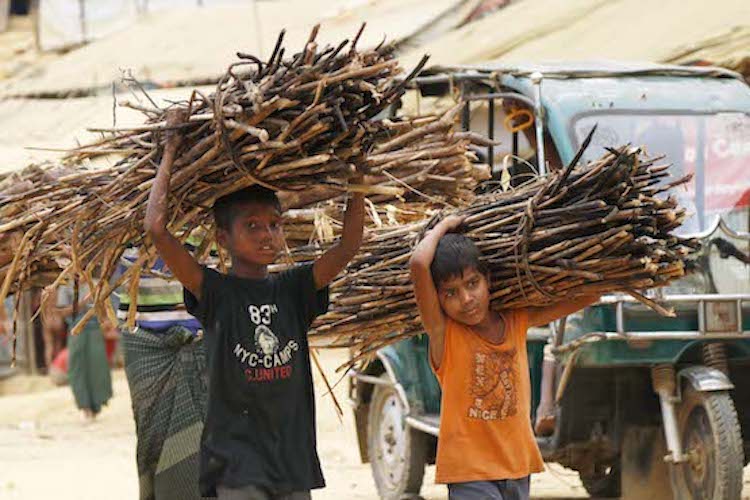 Clearing of forests for human habitation has endangered wildlife in the area including elephants, according to Ali Kabir, divisional forest officer in Cox's Bazar.

"If you live in an elephant's habitat, the inevitable is not unexpected. Thousands of hectares have been cleared and refugees collect 800 metric tons of firewood from the forest every day. We fear that if deforestation continues at this rate there will be no more forest left out by the end of 2019," Kabir told ucanews.com.

Kabir said the cutting of trees must stop and refugee settlements that blocked traditional elephant migration corridors need to be relocated to keep refugees safe from elephant attacks and deaths. The UNHCR and IUCN carried out a joint survey covering 70 square kilometers of Cox's Bazar. It revealed a traditional elephant migration route has been completely blocked due to new refugee settlements, and about 35-45 Asian elephants are living in the forest of the southern part of Cox's Bazar. There are about 93 migratory and 96 captive Asian elephants in Bangladesh, and they are critically endangered, according to the IUCN.

"Elephants always follow traditional path for migration, and the blocked crossing point was a bridge for them for movement between Rakhine and Cox's Bazar. Now, elephants are trying to find the lost corridor by entering camps from various sides, and casualties are taking place," IUCN country representative Raquibul Amin told ucanews.com.

The IUCN and UNHCR have formed 30 elephant response teams of 10-12 people in the camps. They are also setting up 92 elephant watchtowers, more response teams and training.

"We have set up 26 watchtowers and others are being constructed. We would like to form 46 teams and offer training to about 500 people," Amin said.

Two persons are on duty at the watchtowers at night and early morning, when elephants usually move, and they warn others when they spot an elephant. Then the team tries to make the elephant return to the forest.

"This is a temporary solution, and we are not sure how long this protection system can work. We need to work more on it and see if we can come up with a permanent solution," he added.

Panic among refugees over elephant attacks has reduced if not vanished, said James Gomes, regional director of Catholic charity Caritas Chittagong, which is active in refugee camps.

"Even one month ago, people had sleepless nights fearing elephant attacks. They had never faced such a threat and didn't know what to do. The situation is better but refugees are still vulnerable, and more work needs to be done to sort out an effective plan ," Gomes told ucanews.com.

Back at her reconstructed tent in Kutupalong, Anwara Begum says she can sleep well with her children now. "I am less frightened because I know there are guards watching over elephant movements," she said.