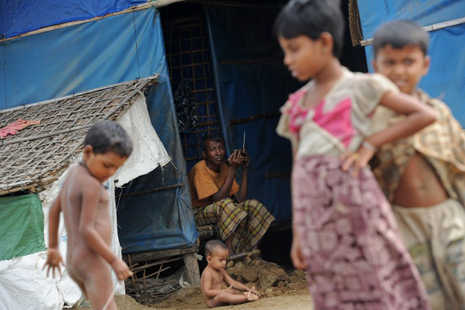 A Rohingya man listens to the radio in an IDP camp outside Sittwe, Rakhine State (AFP photo/Soe Than Win)

One person has died and nine were injured following clashes between police and members of the Rohingya minority in western Myanmar on Friday, the latest in a series of recent flare ups in the restive Rakhine state.

Officials in the Rakhine state capital of Sittwe said that a group of Rohingya had been apprehended as they attempted to torch two police outposts in the town. Along with the casualties that resulted from the subsequent clash, eight Rohingya were arrested.

The incident came in response to an earlier clash with police on August 8, triggered by the refusal of authorities to return the body of a Rohingya man who drowned.

Win Myaing, spokesperson for the Rakhine state government, confirmed the death but did specify the injury.

“Police are in the investigation process for the arson by eight Bengalis and the situation in Sittwe has normalised since last Friday evening,” he said, referring to the term many in Myanmar use to refer to the Rohingya, whom they believe to be illegal immigrants from Bangladesh.

He added that the government has financially compensated those injured in the clashes but did not specify the amount.

Of the August 8 incident, Win Myaing said that police had fired warning shots into the air but that they were not heeded by a 500-strong mob of Rohingya. “The angry mob responded to the attack by burning down two police outposts,” he said.

Myo Thant, a Rohingya politician from the Democracy and Human Rights Party, said however that up to seven had died in the Friday clashes.

He is in the country for 10 days, during which he will visit areas of Rakhine state and the town of Meikhtila in Mandalay division, where violence between Buddhists and Muslims has been of particular concern. He is also due to visit Kachin and Chin states.

“In Rakhine state, I will be looking at the steps being taken to implement the president’s vision of developing a harmonious, multi-cultural society in Myanmar, which respects and protects the human rights of all,” he said in a press release last week.

“This will include measures to ensure that the perpetrators of human rights violations, including state officials, are held to account.”