Country claims it has no history of recognising persecuted Muslim group, as refugees suffer in camps 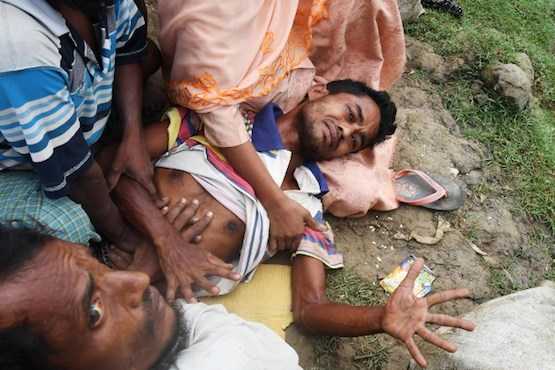 Rohingya refugees who were stranded in a 'no-man's land' between Myanmar and Bangladesh try to comfort a refugee suffering from stomach pain as they wait to enter Palongkhali in Bangladesh's Ukhia district in this Nov. 2 photo. More than 680,000 Rohingya have arrived in Bangladesh since a military crackdown in Myanmar in August triggered an exodus, straining resources in the impoverished country. (Photo by Dibyangshu Sarkar/AFP)

More than 680,000 Rohingya have fled their homes in strife-torn Rakhine State since the end of August last year, pushed out by a violent campaign waged by Myanmar's military which says the Muslim ethnic minority does not officially exist within its borders.

The Buddhist-majority country refuses to recognize the term Rohingya, seeing the ethnic group instead as illegal migrant "Bengalis."

Tin Aye, a former general and lawmaker from the military-linked Union Solidarity Development Party (USDP), pressed the government of State Counselor Aung San Suu Kyi on Feb. 5 to relay that message to the world.

Thein Swe, the minister for labor, immigration and population, appeared to support Tin Aye's argument by telling Myanmar's Lower House the term "Rohingya" has never appeared on any of the country's census lists featuring 135 ethnic groups.

Moreover, it is not used in state-owned and private media, he said. Former army general Tin Aye said the Royingha have never existed in Myanmar as a legitimate ethnic group. Here he is shown delivering a speech during an event to announce the election results at Naypyidaw on Nov. 15, 2015 . (Photo by Ye Aung Thu/AFP)

The use of the word has become a sensitive subject in Myanmar in recent months.

When Pope Francis flew to the country's capital Naypyidaw in late November to meet with army chiefs and other officials there he refrained from using it throughout the duration of his trip.

But on the next leg of his journey in neighboring Bangladesh, the pontiff spoke up for the Rohingya, who — along with rights groups — have accused Myanmar of launching an ethnic cleansing campaign against them.

Myanmar diplomats and some UN bodies have also chosen to avoid using the provocative term, and have protested its usage by others.

The Ministry of Foreign Affairs requested the U.S. embassy in Yangon refrain from using it in April 2016 when the embassy posted a message of condolence after a boat sank off the country's coast, killing over 20 people.

Neither the previous, military-backed government nor the current National League for Democracy (NLD) will recognize the legitimacy of the group despite vast numbers of Rohingya having lived in Myanmar for decades, critics say.

Yet historical records suggest the regime is trying to gloss over some episodes where its leaders have directly mentioned the long-suffering group. Myanmar's first independent prime minister, U Nu, used the term in a radio speech broadcast in September 1954 when he spoke warmly of the Rohingya as "national brethren."

Kyaw Min, chairman of Democracy and Human Rights, a Yangon-based Rohingya party, said the group has no future in Myanmar as the situation is worsening for it under the government of Suu Kyi, a former Nobel Peace laureate whose reputation has taken a hammering due to her silence on the refugee crisis.

Kway said the Rohingya have not been allowed to vote in elections, were unable to move freely across the country and have had scant access to healthcare and education for much of the last 70 years.

They are now facing even greater levels of oppression, he added.

"The previous and current governments have said repeatedly that we are illegal immigrants from Bangladesh and they are attempting to erase [our] history. So what can we do?" Kyaw Min told ucanews.com.

Suu Kyi has been criticized for not speaking out on behalf of the Rohingya or explaining how the country's relatively new leadership intends to protect the rights of the Muslim minority. Pope Francis is greeted as he arrives at the Church of the Holy Rosary complex, where the Mother Teresa House is part of, in Dhaka on Dec. 2. Pope Francis arrived in Bangladesh from Myanmar on Nov. 30 for the second stage of a visit that has been overshadowed by the plight of hundreds of thousands of Rohingya refugees. (Photo by Noah Seelam/AFP)

The NLD government has not made an official announcement of the presence of the Muslim minority in Myanmar despite former president Thein Sein stating that the Rohingya "do not exist" and should be referred to exclusively as "Bengalis."

Suu Kyi has only referred to them as "Muslims in Rakhine" in her speeches despite state media using the term Bengalis.

During her meeting with U.S. Secretary of State John Kerry in May 2016, she said the terms Rohingya and Bengali should not be used because they are divisive and "emotive" words that do not help resolve the conflict.

Nyan Win, a member of the NLD's central executive committee (CEC), highlighted the group's omission from past and current census lists.

"In my view, why can we not tell the world there is no such race in the country, as the Rohingya have never existed here?" he told ucanews.com.

Catholic bishops urged Pope Francis to avoid using the word Rohingya during his visit there last year and some critics applauded him for not stirring up a hornet's nest and alienating the regime's leadership.

Cardinal Charles Maung Bo of Yangon, who advocates for minority rights, also gave the pontiff a last-minute suggestion to skip over the sensitive term so as not to trigger a backlash from nationalist groups.

Cardinal Bo, the only Catholic leader who has repeatedly used the word Rohingya in his statements and speeches, also went quiet on the matter prior to the pope's visit.

However he said recently that those Rohingya who have fled will probably never return to the country as hate speech and propaganda by the Buddhist majority have become commonplace. In this Sept. 7 file photo, a house burns in Gawdu Tharya village near Maungdaw in Rakhine State. Aerial photos of Rohingya villages in Myanmar have emerged showing apparently bulldozed land with no recognizable signs of habitation, as activists say there are growing fears that the Muslim minority will lose not only their homes but their history. (Photo by AFP)

Kyaw Nyunt, an associate pastor of Judson Church in Yangon, said the term Rohingya was "invented" in the early 1950s and was not used under British rule.

Having served on the Rakhine Investigation Commission, set up in 2012 under Thein Sein, he told ucanews.com that "the government really needs to tell the world the term Rohingya has never really existed."

He said the international community, including several Islamic nations, is only making the crisis worse by emphasizing the use of the term.

According to some historians, the word Rohingya simply means "inhabitant of Rohang" — the early Muslim name for Arakan, a formerly independent kingdom situated where Rakhine now lies. A Rohingya crosses a canal next to a settlement near the 'no man's land' area between Myanmar and Bangladesh in Tombru in Bangladesh's Bandarban district on Jan. 23. (Photo by Munir Uz Zaman/AFP)

The Rakhine Social Network in Sittwe, the capital of Rakhine State, is even rejecting the use of the phrase "Muslims in Rakhine State."

"We reject that term, too, because they are simply 'Bengali,'" Soe Naing, an ethnic Rakhine, told ucanews.com.

Hatred and bigotry toward the persecuted minority have deep roots in Rakhine, where hard-line groups led by senior Buddhist monks such as the Ma Ba Tha have spearheaded a resurgence of nationalist outpouring in recent years.

Over 120,000 Rohingya Muslims have been forced to live in squalid camps in the state since 2012 when a spate of anti-Muslim violence claimed the lives of scores of the group.