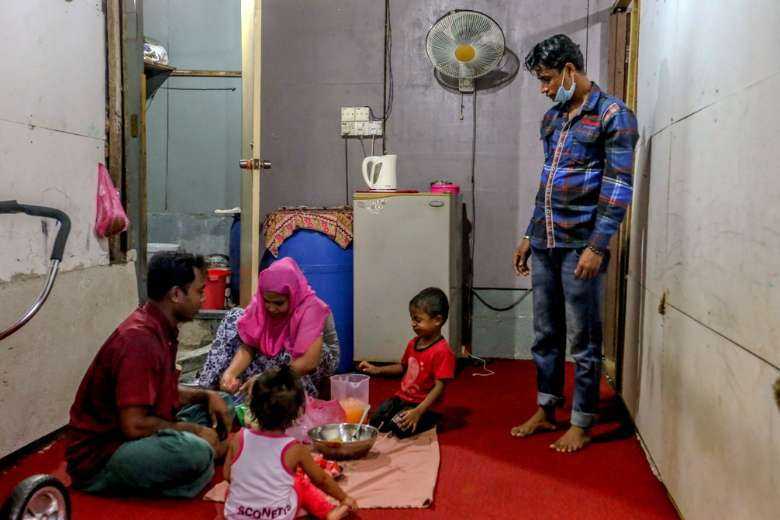 A Rohingya family eating their meal at their house in Kuala Lumpur, Malaysia. (Photo: AFP)

The plight of the Rohingya community was highlighted at a workshop organized by advocacy group Catholic Action Network (CAN) Malaysia on July 23, reported Herald Malaysia, a Catholic weekly of Kuala Lumpur Archdiocese.

It drew representatives from the Rohingya Women’s Development Network (RWDN), the Consultative Council of Malaysian Islamic Organizations (MAPIM), Beyond Borders Malaysia and the Archdiocese of Kuala Lumpur.

Cik Syaedah, an activist with RWDN, said the Rohingya community suffered severely during the Covid-19 pandemic. Many were rendered jobless and left without any means to support their families due to the restrictions on movement imposed by the government.

The RDWN is helping the hapless Rohingya with food aid and alternative jobs such as sewing face masks, said Syaedah, who has been living in Malaysia for about two decades.

Cikgu Mohd Azmi, the president of MAPIM, pointed out that most Rohingya in Malaysia lack proper documentation and end up being denied welfare services, livelihoods, education for children, health services and accommodation.

Out of fear, many Rohingya are reluctant to go out to buy daily essentials or to look for livelihood opportunities

He noted that xenophobia against Rohingya renders them most vulnerable and causes untoward fear in the community. Rohingya women are often targeted for sexual harassment and body shaming.

Out of fear, many Rohingya are reluctant to go out to buy daily essentials or to look for livelihood opportunities. Local authorities do precious little to halt the hostility and hate speech against them, Azmi added.

Mahi Ramakrishnan from Beyond Borders lamented the unwillingness of Malaysians to work with refugees.

The hostility and negative attitude toward Rohingya stem from ignorance about their struggle, fear of losing jobs to foreigners and fake news circulating on social media, said Father Bernard Hyacinth from the Archdiocese of Kuala Lumpur.

The activists called on Malaysians to show humanity toward refugees and to consider them as human beings who have needs, dreams and aspirations.

Media reports and rights groups say Rohingya refugees in Malaysia live like pariahs amid abuses and threats from Malaysians who want them out of their country.

In early April, a prominent Rohingya activist, Zafar Ahmad Abdul Ghani, 51, went into hiding after he faced death threats from ethnic Malays after rumors spread that he had sought Malaysian citizenship.

In April 2020, Malaysia came under strong international criticism for pushing away boatloads of Rohingya from its shores. In June that year, the authorities detained 269 Rohingya refugees after the engine of their boat was damaged while attempting to land in Malaysia.

In July that year, the government came under fire for sentencing a group of Rohingya to caning as well as jail time for allegedly violating the country’s immigration law.

In February this year, Catholic bishops joined rights groups to oppose a government decision to deport nearly 1,100 Myanmar nationals, mostly Rohingya, to their country. The authorities had deported the asylum seekers despite a court order banning the move.