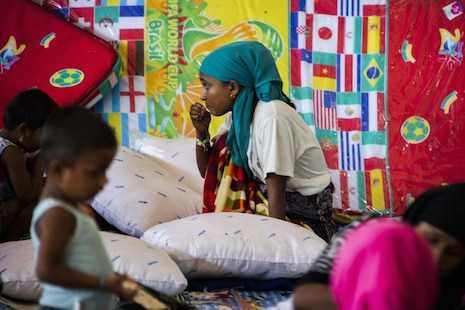 Refused citizenship by their government, stateless Rohingya from western Myanmar are also being shunned by the country’s main opposition party the National League for Democracy (NLD).

They are at the center of Asia’s biggest refugee crisis since the Vietnam War but remain friendless.

A senior NLD member of parliament has admitted that the Rohingya are a political liability as the party prepares for a general election in October or November this year.

Win Htein, a former army officer and adviser to NLD leader Aung San Suu Kyi since 1988, told ucanews.com that while he sympathized with the plight of the estimated 1.3 million Rohingya in Myanmar, his party had "many things to consider from a political point of view”.

“The problem is Arakan people, the Rakhine people,” he said. Arakan is the former name for Rakhine.

At the heart of the Rohingya’s plight is the refusal by the Myanmar government to recognize the Rohingya as a discrete ethnic group, a stance that has now been publicly backed by the NLD amid disputes between Myanmar and Bangladesh over the origin of the many refugees.

More than 200,000 Rohingya remain in official and unofficial refugee camps in Bangladesh.

"The government and ourselves do not recognize the term Rohingya,” Win Htein said.

“We call them Bengali Muslims because they came from there. We can’t work out this problem until the Bangladesh government acknowledges the problems.”

The latest dispute flared up on June 5 over the origin of 1,000 people arriving back in Myanmar in two boats.

Win Htein said he was branded a “Muslim lover” by Buddhist hardliners three years ago when he showed support for Muslims in his constituency after an outbreak of violence.

“Rakhine politicians are vehemently anti-Muslim in parliament,” he said

The NLD is facing stiff competition for votes in Rakhine state from the Rakhine National Party, which takes a rigid anti-Rohingya stance.

Rakhine politician Zaw Aye Maung said on June 5 that high population growth and lack of economic opportunities in Bangladesh were driving illegal migration into Myanmar and that many Bangladeshis claim to be from Myanmar for “political reasons”, the Myanmar Times reported.

Aid groups say that relentless propaganda from the Myanmar government has created a situation where the country’s regular citizens resent the Rohingya.

"I've always been a politician. I've never said that I was a moral organization or anything like that," Suu Kyi said when quizzed on the issue in a recent interview with Canada’s The Globe and Mail.

But her silence on the issue is fast tarnishing her reputation. Rohingya are denied rights of movement, access to basic education and health services.

The long-simmering resentment towards the Rohingya dramatically escalated into violence in 2012 with at least 280 deaths and widespread destruction of homes and businesses.

About 140,000 Rohingya were forced into makeshift refugee camps in Rakhine and countless others live in conditions that rights organizations describe as being akin to apartheid.

“The Rohingya have been discriminated against significantly, and that’s part of the reason they’re fleeing,” US President Barack Obama said on June 1, an accusation denied by the Myanmar government

Speaking at a panel discussion on the crisis at the Foreign Correspondents Club of Thailand on June 3 Matthew Smith, founder of Fortify Rights, a group devoted to documenting the conditions of oppressed minorities that has focused on the Rohingya, suggested that the Myanmar government’s actions should be looked upon as potential genocide.

The crisis that has developed has exposed fracturing religious divisions and conflicts in Asia more broadly.

On June 2, there were fresh anti-Muslim protests in Myanmar's commercial center, Yangon, as well as pro-Muslim rallies in Malaysia and Indonesia.

Observers fear Muslim extremists will exploit these tensions as they attempt to increase their foothold in Southeast Asia.

Still, Win Htein provided some hope not being offered by the government, saying for the first time that if the NLD wins power in the general election, due later this year, it plans to grant citizenship to some Rohingya.

He said the NLD would recognize “Bengali Muslims” as citizens if their family’s arrival in Myanmar dates back to British colonial rule.

Win Htein also said the party was considering issuing a statement in coming weeks on the problem "because we cannot stay silent any more".