While almost half a million Rohingya have fled to Bangladesh, fate of 120,000 in camps further south has been forgotten 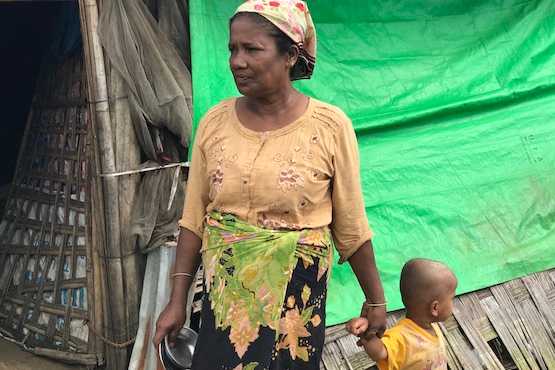 A Rohingya woman and a child in Thetkaepyin internally displaced people camp near Sittwe, Rakhine State on Sept. 12. (ucanews.com photo)

Abdul Marche has languished in an internally displaced people (IDP) camp outside the Rakhine State capital Sittwe on Myanmar's coast for more than five years and yearns to return home.

Marche, a Muslim Rohingya with no citizenship in his country, said he lived with ethnic Rakhine, who are mainly Buddhist, before sectarian violence broke out in 2012.

"If we get a chance to return home, we have no problem in living together with the Rakhine as we did before," Marche, who is from Thetkaepyin IDP camp near Sittwe, told ucanews.com.

He is just one of more than 120,000 who remain in the camps in apartheid-like conditions. Their freedom of movement and access to health care and education has been severely restricted since 2012 when violence that erupted between the Rohingya and ethnic Rakhine left more than 200 people dead and vast swathes of property destroyed.

Marche and other Rohingya IDPs now have some hope in returning home after Kofi Annan-led Rakhine Advisory Commission recommended closing the IDP camps and allowing for freedom of movement.

The commission recommended that the government take concrete steps to end enforced segregation of Rakhine Buddhists and Rohingya Muslims. It also recommended full and unfettered humanitarian access through the state and for the government to revisit the 1982 citizenship law, that resulted in most of the Rohingya being rendered stateless and without voting rights.

The Arakan Rohingya Salvation Army (ARSA) attack on police posts and an army base on Aug. 25 came just some hours after Annan's commission released its final report in Yangon. Those attacks led to Myanmar military's clearance operations which has led to more than 1,000 people being killed and more than 420,000 Rohingya being driven from their homes to Bangladesh.

The violence in parts of the state where most of the inhabitants are Rohingya has not spread into the state's predominantly Rakhine Buddhist center but security has been tightened in Sittwe where there are now night-time patrols around Rohingya IDP camps that are cordoned off by police guards.

Marche said he learnt about the Quran and studied Arabic at an Islamic school but was not taught about radicalism or terrorism.

"We don't support the act of terrorists and we never talk about the violent way. We are concerned that the latest violence may undermine our hopes on going back home," Marche said. Abdul Marche with his daughter and other children in Thetkaepyin internally displaced people camp on Sept. 12. (ucanews.com photo)

Zafaw Alarm, who has resided in Dar Paing IDP camp near Sittwe since 2012, said he still hopes to return to his home and live together with ethnic Rakhine.

"We have been like prisoners for more than five years and we are not treated as human beings. We want to go back home but it is up to the government to allow it," Alarm, a 58-year-old father of seven children, told ucanews.com.

He said he has lost trust in Suu Kyi with her failure to speak up for the Rohingya.

Meanwhile, Furuk, who is in-charge of the Dar Paing IDP camp, near Sittwe, told ucanews.com that many Rohingya had pinned their hopes on Suu Kyi when she took office in April 2016.

"We had a 100 percent expectation in Suu Kyi when she became the head of a new civilian government but I don't see any changes in the camps and our freedom of movement remains restricted," said Furuk. Suu Kyi's government has said that it will implement the recommendations made by the Rakhine Advisory Commission, a claim she repeated in a widely-watched address to international diplomats in Myanmar's capital Nay Pyi Taw on Sept. 19. She said this despite opposition to it from Myanmar's military which controls the camps and northern Rakhine.

Nationalism and anti-Muslim sentiment have increased following the latest violence in northern Rakhine. But hatred and bigotry toward the minority Rohingya has been deeply rooted in Rakhine.

Kyaw Hla Thein, an ethnic Rakhine and a taxi driver in Sittwe, strongly responded when asked about the possibility of Rakhine and Rohingya living together. He said it was impossible.

"We, ethnic Rakhine, can't live together with them (Rohingya) as they give too much trouble and they are problem-makers," Kyaw Hla told ucanews.com.

Hundreds of ethnic Rakhine have fled their homes due to Rohingya militant attacks so we are afraid and do not trust them, he said.

"Ethnic Rakhine are portrayed as villains by the international media but in reality, our people are living in fear and anxiety," said Kyaw Hla.

Nyan Win, a central executive committee from the ruling National League for Democracy, told Reuters recently: "We can accept them (Rohingya) as humans but we cannot let them move around freely, which violates our sovereignty. The Rohingya belong in camps for displaced people in Rakhine due to security reasons."

"We can't give them freedom of movement because they are not our citizens," said Nyan Win.

Myanmar government regards the Rohingya as "Bengalis." By not recognizing the term "Rohingya," the government has implied that they are illegal immigrants from neighboring Bangladesh, despite vast numbers of them having lived in Myanmar for decades.