In this photograph taken on Sept. 27, 2017, Rohingya refugees run for food being distributed at the Thangkhali refugee camp near Ukhia.(Photo: AFP)

As Myanmar gears up for general elections on Nov. 8, 2020, thousands of the persecuted Rohingya community face uncertainty over their right to vote.

Around one million Rohingya from the country’s western Rakhine state who held “white cards” could vote in the 2010 general elections and three Rohingya from the Union Solidarity and Development Party(USDP) were elected as lawmakers during 2011-2015.In 2013, Rohingya people, with temporary white-card identity documents that previously allowed them to vote, were stripped of voting rights. It was the move of the then-president Thein Sein, a former general, who ruled the country from 2011-2016 before handing power to the Aung San Suu Kyi-led government.
Donate to UCA News with a small contribution of your choice
A controversial 1982 law states that only ethnic nationalities whose families entered the country before 1823 are entitled to Myanmar citizenship. The Rohingya have thus been denied citizenship and accompanying rights, and have been marginalized in access to education and other government services.Furuk, a Rohingya and camp leader at Dar Paing internally displaced persons (IDPs) camp near Sittwe, the capital city of Rakhine, said he got a chance to vote in 2010 elections but he couldn’t cast a ballot in the 2015 polls.“As a citizen of Myanmar, I have a desire to vote and I feel it’s a duty of everyone living in the country,” Furuk told UCA News.He said people from the camps have little knowledge about the upcoming elections and no idea whether they will be able to vote.“Local authorities were collecting household lists in the camps, but we have not been informed about the development of the voting list,” Furuk said.Some 100 people applied for a government-initiated National Verification Card (NVC) and recently received naturalized citizenship after waiting for six months, according to Furuk.“But we are still unsure whether our names will be included in the voting list for the Nov. 8 polls,” he asserted.
Related News 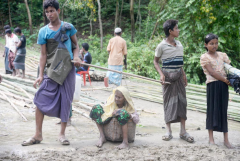 Thank you. You are now signed up to Daily newsletter
More than 100,000 Rohingya IDPs, as well as Rohingya host communities, are confined to a cluster of small villages and 20 official camps sitting precariously between strictly maintained police checkpoints and the Bay of Bengal, on which tens of thousands have attempted a perilous escape by boat toward Thailand and Malaysia.The ethnic Rakhine community rejects the existence of the Muslim group calling themselves Rohingya. Members of the Buddhist ethnic group - itself subjected to oppressive rule by the ethnic Bamar who dominate Myanmar’s ruling elite - insist that the majority of Muslims living in Rakhine state are recent illegal immigrants from Bangladesh.Myanmar does not accept the Muslim Rohingya people as citizens despite many of them claiming to be living in the country for generations.

Kyaw Hla Aung, a Rohingya activist who resides in Thetkaepyin IDP camp near Sittwe, said Muslims in Rakhine had faced discrimination, and they were disenfranchised from their right to vote in 2015 elections.

“There is no rule of law, and conditions in the camps are not improving. It raised questions over whether there has been any development for Rohingya in the post-election era,” said Aung, who received the Aurora Prize for his efforts to secure Rohingya rights.On June 25, a Yangon-based Rohingya party - the Democracy and Human Rights Party (DHRP) that represents Rohingya in northern Rakhine - sent a letter to officials from the election commission urging it to allow voting for those who hold white cards as well as let them to run for office.The party cited in the letter that Rohingya were allowed to vote in the national and referendums under previous governments but they lost their right to vote in the 2015 elections.