A nun gives out medals during a 'pink caravan' in support of Leni Robredo's bid for the Philippine presidency in Manila on Oct. 23. (Photo: Eleanor Llanes)

Thousands of Leni Robredo supporters took to their vehicles to stage simultaneous processions across the Philippines on Oct. 23 to show support for the vice president’s bid for the top office in presidential polls next year.

All supporters wore pink, a color that has been adopted by Robredo and her supporters as a symbol of hope for new and better governance.

Robredo’s team said there were about 10,000 vehicles in the motorcades dubbed as “pink caravans” to sow hope among the people.

At least 50 vehicles paraded in Davao City in Mindanao, the hometown of President Rodrigo Duterte.

Among those who also turned out at various locations were nuns from several congregations, some of whom  waved pink flags and wore aprons. Others distributed religious medals with pink ribbons while wearing pink masks.

Sorsogon priest Father Emmanuel Afable explained the meaning of pink in the liturgical calendar of the Catholic Church.

So, if the sisters wore pink, it was to symbolize hope. They are fighting for hope and the joy it brings to society

“Pink means hope. Like on Gaudete Sunday, the third Sunday of Easter. During Lent, the fourth Sunday is called Laetare and speaks of joy that we should possess,” Father Afable told UCA News.

“So, if the sisters wore pink, it was to symbolize hope. They are fighting for hope and the joy it brings to society.”

Manila parishioner Ruby Vasquez said in a Facebook post: “Although clergymen and nuns cannot engage in partisan politics, they can voice support for good governance, oppose killings and corruption. These are clear moral problems that we are facing now as a people.”

Robredo later thanked her supporters for organizing the event. 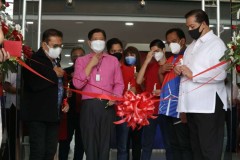 “I was not expecting that this many would participate. Looking at the photos, it seems that every location has a different gimmick but one in advocacy — hope,” she said.