Prime ministers, presidents and heads of international banks have caused a potential catastrophe 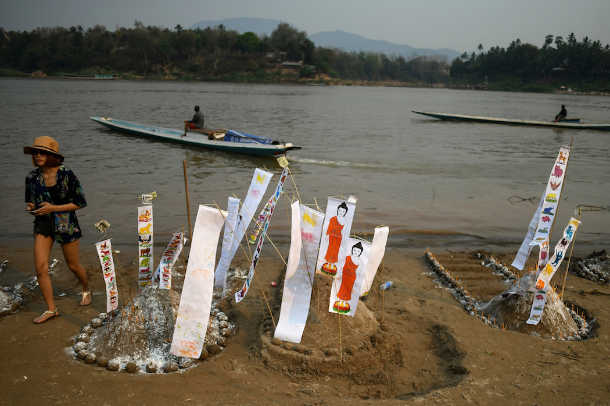 This photograph taken on April 14 shows a tourist walking past sand stupas or "Toppathatsay" on the banks of the Mekong River to mark the Laos New Year or "Pi Mai" celebrations in Luang Prabang. (Photo by Manan Vatsyayana/AFP)

The Mekong River is again striking record lows, threatening crop production, fish stocks and the livelihoods of 70 million people amid rampant over-development and dire warnings. But this year’s drought, the second in three years, could mark a turning point and a bleak future.

Scientists, backed by environmental activists, have warned for nearly two decades that frenetic dam construction could kill the world’s 12th longest river. And plain-speaking counter-terrorism experts say that would provide the same recipe that produces failed states and conflict.

The tragic reality is that self-righteous, corrupt politicians and greedy businessmen, working in tandem with political systems that shut down dissent, have ignored the science and are now facing a reality they can only wish would go away as droughts become more common.

A lack of monsoon rains, as predictable as the El Nino weather phenomenon, and dams that the authorities insisted would not harm the environment, have pushed the Mekong to its lowest ebb in 100 years.

Nevertheless, a total of 11 dams across the mainstream of the Mekong River and a further 123 dams to be constructed across its tributaries are envisaged, perhaps three times more than currently exist.

As the current crop of Chinese and Laotian dams hold back water needed to fill reservoirs and run electricity grids it’s in the lower reaches of the Mekong Delta where the population feels the punch first.

Fish migration and spawning patterns are upset and stocks are low, paddy fields are parched and salinity from the South China Sea is reaching ever further into the Mekong Delta, destroying freshwater habitats.

It’s a process exacerbated by acidification of the seas through rising temperatures and not helped by over-fishing and the use of illegal electric nets. The end result is many of the 850 species of fish that once thrived, including the Irrawaddy dolphin and the giant catfish, are now endangered.

That matters in Vietnam, where 50 percent of agricultural GDP is derived from the river and poverty forces families to eat hand-to-mouth.

Sketchy reports are emerging that they are on the move.

But those most at risk can’t complain. In Cambodia, a one-party-state, the government has shut down the independent press and aligned itself closely with China, which in turn has pumped billions of dollars into its tiny economy.

Who is to blame?

The Mekong River Commission and the Association of South East Asian Nations (ASEAN) like to promote themselves as regional institutions but neither has proven capable of promoting sustainable development along the Mekong.

That has enabled governments in the six countries the Mekong traverses; China, Laos, Myanmar, Thailand, Cambodia and Vietnam, to put their own political interests first and get it badly wrong.

Prime ministers, presidents and heads of international banks are responsible for a situation that is threatening to become a catastrophe over the coming years, and if so could provide grounds for an investigation by the International Criminal Court in The Hague.

That’s where Viraphonh Viravong, the deputy minister of Energy and Mines, and chief propagandist for construction of the Xayaburi Dam that blocked the mainstream of the Mekong in Laos, would make for interesting testimony. He insists that dam was, and still is, a good idea.

International lawyer Richard Rogers said there was “potential” for the forced displacement of people under such conditions to be considered a crime against humanity.

However, prosecutors would need to prove that problems caused by dam construction amounted to a widespread or systematic “attack” on people through government policy.

“If the mass-forced displacements were illegal under international law — it can be legal too if the right procedures are followed — and they were part of the government policy then it has potential,” he said in regards to the water issues confronting southern Indochina.

The ICC is currently considering land confiscation and the forced removal of people from their properties in Cambodia as a crime against humanity.

At the top of the food chain where ultimate command over the Mekong rests, sits China.

U.S. Secretary of State Mike Pompeo recently warned that Beijing was taking control of the Mekong through dam construction. The warning came too many years too late. China has floated the idea of turning the entire river into a canal for more than a decade.

He said the Chinese had built up to seven dams “without any consideration for downstream countries” and added: “In a sense they want to make the Mekong their river.”

This includes gun boat patrols south of its border and talk of navigating the river to Luang Prabang in northern Laos, which would require blowing up the last set of rapids in the area. And it’s not just the mainstream that is to be reshaped and manicured to suit vested interests.

As recently as 10 years ago it was possible to navigate the entire length of the Namu River, a Mekong tributary, in Laos. Osborne noted this is now impossible after seven dams were built on the Namu alone, which he added, “has escaped international attention.”

He said that two of nine mouths of the Mekong Delta, where the tributaries meets the South China Sea, have apparently already closed and, looking much further out, he said: “There are suggestions that the delta could cease to exist by the end of the century.”

Such warnings have escalated since the drought of 2016 when, according to urban legend, it was possible to walk across the Mekong at its shallowest point for the first time ever.

The great and more imminent danger, however, is a collapse in the food chain leading to famine, forcing millions to flee and undermining the authority of those responsible for their plight. They have been put on notice by the scientists and environmentalists.

“The question now,” Osborne posed, “is what can be done to prevent further difficulties for the future of the Mekong?”