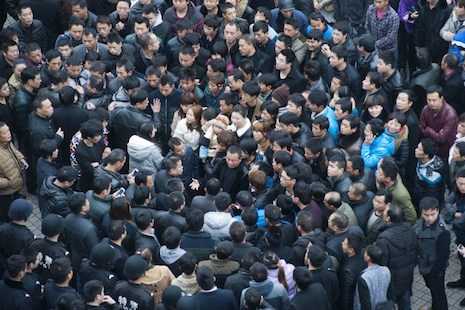 Workers gather in a square before the government headquarters in Wenling, in east China's Zhejiang province, to protest after an extensive crackdown on workplace safety standards forced the closure of more than 4,500 shoe factories, in February last year (AFP Photo)

By Tom Hancock for AFP, Panyu

As workers gathered around a table in a cheap restaurant to discuss strike action against their shoe factory bosses, Chinese police barged in and dragged away their leaders.

More than 2,000 employees at the plant — which counts foreign brands including Coach among its customers, according to workers — had downed tools, camping out on brightly colored mats to demand unpaid benefits.

"They burst through the door and told us not to move," said a female worker. Several said police had beaten them, and one woman wore a large bandage covering injuries on her back.

The organizers were held for less than a day, but the walkout by the whole staff last month paralyzed production — and weeks later the workers claimed victory.

Once renowned for their cheap wages and docility, the protest at the Taiwanese-owned plant is an example of how employees in the workshop of the world are increasingly standing up for greater benefits.

"Ten years ago we didn't have any conception of the law or defending our rights," said a male worker, who like others asked not to be named for fear of reprisals.

Low-cost labor has been key to China's decades-long economic boom, and the newfound activism has authorities worried.

The grey Lide facility in Panyu city is one of tens of thousands of factories in the southern province of Guangdong producing everything from denim jeans to smartphones.

He called legislation promoting bargaining between workers and employees "scary", and blamed excessive "union power" for the multiple bankruptcies in the US auto industry.

There were 1,379 protests by workers in China last year, more than tripling in just three years, according to data from the Hong Kong-based China Labour Bulletin (CLB).

That included China's biggest strike in decades, when tens of thousands of employees at Yue Yuen, another Guangdong factory that makes shoes for Nike and Adidas, won concessions despite worker arrests.

The Communist Party fears an independent labor movement, and only allows one government-linked trade union federation — that claimed 290 million members at the end of 2013 — which tends to side with employers.

But campaigners say employees have been empowered by a labor shortage and recent laws giving them greater rights.

"They are not only aware of their rights but understand that they are part of the working class, a class that increasingly has the strength and ability to forge its own destiny," CLB said.

When activist Wu Guijun arrived in the manufacturing hub of Shenzhen 13 years ago, strikes were almost unheard of, despite his meager monthly wages of just a few hundred yuan.

"Workers struggled individually, and rarely spoke of defending their rights," he said.

Now migrants from the countryside to China's cities who make up the bulk of factory labour, have seen their average monthly earnings reach 2,864 yuan (US$464) last year, up 10 percent on 2013.

The rise has been driven by both growing prosperity and supply and demand — China's working-age population is shrinking.

Workers have been emboldened, Wu said. "As their living standards improved, they have started to pursue the respect and status they deserve from society."

Wu turned to activism after leading his co-workers in protest when his furniture factory faced sudden closure in 2013.

Despite striking or organizing walk-outs not being illegal, Wu was detained by police for more than a year until prosecutors dropped charges of "gathering a crowd to disturb public order".

Given a compensation payout of more than 70,000 yuan for unwarranted detention, he founded his own labor rights organization — the 100 Million New Labourers Centre.

In a borrowed office stocked with pamphlets on Chinese labor laws, Wu advises young workers on strike tactics and how to use social media, despite the constant threat of police harassment and detentions.

'Our pay is still low'

Authorities face a dilemma between raising living standards for ordinary people, a key part of their claim to a right to rule, and ensuring healthy profits for local industries — often with close official connections.

At the same time they consider social unrest anathema and want to see economic growth, but China is facing increasing labor cost competition from elsewhere in Asia.

In the face of rising inequality, China's government over the last decade passed landmark laws establishing employee rights including social insurance payments from employers, and compensation when factories relocate.

But the Lide shoemakers had no doubts where the authorities stood.

"The government here just pressures us workers. It speaks on behalf of the bosses," said one worker of more than a decade.

None of the companies involved, or the police, would comment when contacted by AFP.

After the six-day stoppage, employees went back to work, saying they had won sufficient concessions.

"We basically got what we wanted," said one female worker. "But our pay is still low. How can we be satisfied?" AFP