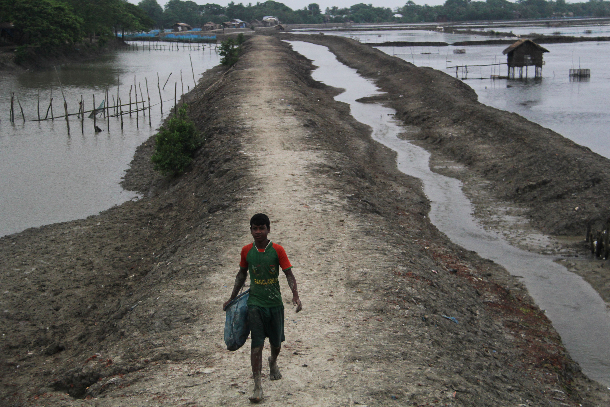 A young boy returns home after fishing in the southern district of Satkhira in this July 2015 photo. Analysts warn of further troubles ahead in low-lying Bangladesh. (Photo by Stephan Uttom/ucanews.com)

Ruksana Begum will never forget how the Pasur River swallowed their home one dreadful night in September 2018.

“My husband and I were asleep with our son and daughter when we were woken by a sudden hue and cry,” said Begum, 30, a Muslim housewife from Bajua village in Bangladesh’s southwestern district of Khulna.

“We rushed outside and found a huge crack in front of our house. Within minutes the river had wiped away the structure and all our belongings," she said.

“If we’d woken just 10 minutes later we would have been badly injured or even killed. We survived but lost everything we had, including our food, clothes, utensils and some money we had stashed away.”

Begum and her husband had lived in the tin-roofed and bamboo-fenced house since marrying in 2007.

Hundreds of coastal villagers like them have also lost everything following the dramatic erosion of Pasur, a major river that flows through the Sundarbans mangrove forest and connects with the Bay of Bengal.

Since the disaster, the Ruksanas have moved to a neighboring village, where Begum’s father has given them a plot of land to build a new house.

They received some basic assistance from the government including rice, sugar and oil, but nothing toward rebuilding either their house or their lives.

Husband and wife have been working as farmhands to pay their bills, including their children’s school fees; the mother of two hopes that the education will give them a better life than she and her husband have had.

“No matter how difficult it seems, we will help our children to complete their education and get jobs, so they can move to the city and settle down happily, away from the threats of flooding and erosion,” she said. People disembark from a boat near the River Padma on Sept. 24, 2018. Residents in low-lying Bangladesh
are at risk due to climate change, experts warn. (Photo by Piyas Biswas/ucanews.com)

Sohel Hossain, 25, from Kedarpur village in the central district of Shariatpur, is another victim of river erosion.

Hossain’s family has lost two houses in the last year, due to the devastating erosion of Padma, one of four major rivers in Bangladesh, which also flows into the Bay of Bengal.

The massive 2018 erosion of Padma, in Naria region near Dhaka, made national and international headlines. Thousands were displaced as the river devoured village after village.

“My father used to work in Italy and he constructed a two-storied house, which was destroyed in 2018. Then we moved to another house and the river wiped it away in two months,” Hossain told ucanews.com.

“We lived with a relative for a few months and then we constructed a house on our own land.”

Since the villages were swept away the family has been struggling to survive.

“Losing the second house made us penniless,” said Hossain. “My father has become old and unable to work. I have been working hard to maintain the whole family, including the education of my two younger siblings, by running a small grocery.”

Hossain said the government had offered some food and construction materials to affected communities but the amount was inadequate.

An accident of geography

The trauma experienced by Begum and Hossain is becoming increasingly common in low-lying Bangladesh, one of the most vulnerable countries to the impact of climate change, including rising sea levels, cyclones, floods and river erosion.

Millions of rural and coastal villagers are at grave risk of further climate change-infused disasters in the near future, according to a BBC report published Sept. 2.

The report uses quotes and references from Joyce Chen, an economist and associate professor of Soil, Environment and Agriculture Department at Ohio State University in the U.S.

Last year, Chen co-authored a study that shed light on the connection between climate change and the migration of people within Bangladesh.

“The climate is becoming more volatile, so we are seeing a higher frequency of migration,” Chen told the BBC.

“Where in the past we saw migration due to annual flooding, or river bank erosion, we now more often see saltwater intrusion, which affects the environment long term. It makes it harder to grow crops because the land is permanently altered by the saline water.”

Chen says that in the past people used to go to work in the city for few months while the land was flooded and return when the water receded, but it is no longer possible. “People realize it is not viable to stay,” he said.

Bangladesh has been experienced the slow-burning impacts of climate change in recent decades, said Sadiqul Amin, an associate professor of Soil, Water and Environment discipline at Khulna University.

“Climate change is a natural phenomenon but it can be accelerated by man-made causes like pollution,” Professor Amin told ucanews.com.

“In Bangladesh, we have seen the trends, such as a slow rise in the tide levels and also an increase in salinity in the upstream of coastal rivers. It is happening because global warming is melting polar icebergs and causing sea levels to rise.”

He said rich countries often denied the climate change was responsible for environmental disasters but claimed that climatologists had proved decades ago that the fear was well-founded.

“Once sea levels rise you cannot do much about tackling it, but lots of things can be done to better prepare for the future. That’s where we must focus and get support,” he added.

“More and more people in coastal areas are becoming climate refugees every year because of rising tides, river erosion and loss of their livelihoods due to the intrusion of saline water into agricultural fields,” said Das. “Poor people must embrace this cycle of destruction and rebuilding — only some are able to migrate to the cities or even other countries.”

Climate change, he said, is a devastating reality for vulnerable countries like Bangladesh and more support is needed to implement effective measures that can better adapt and mitigate its impact in future, especially in the coastal areas.

“There is no way we can battle nature that people in this world have degraded through pollution,” he concluded. “Yet, we must do what we can, like planting more trees, sustaining river embankments and promoting alternative agriculture and livelihoods, in order to preserve what is left and support vulnerable communities.”