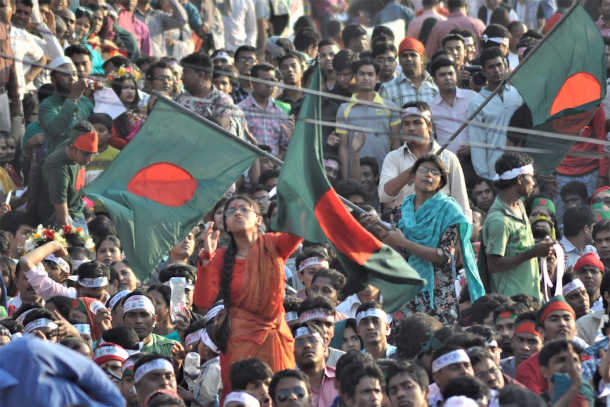 Bangladeshi secular activists chant patriotic slogans at a political rally in the capital, Dhaka in this file photo. (Photo by Stephan Uttom/ucanews.com)

Bangladesh Prime Minister Sheikh Hasina proclaimed during month-long 70th anniversary celebrations for her ruling Awami League (AL) that it would continue to successfully fight off all challenges.

Flanked by party leaders and supporters, the firebrand leader told a gathering last month that the largest and oldest political party in the low-lying nation was too "deeply-rooted" in the public's consciousness to be toppled.

On June 23, 1949 — two years after British partition of India and Pakistan — a group of disgruntled politicians formed the Awami Muslim League in what was then East Pakistan. The word 'Muslim' was later dropped.

These politicians were aggrieved with the then ruling political grouping favoring centralization of the government, a pro-Islamist tilt and discriminatory policies toward Bengali people and politicians in Pakistan's eastern wing.

AL's political agenda centered on 'rights to vote and food' — as well as Bengali nationalism and self-determination — became wildly popular and shocked the political and military establishments dominated by West Pakistanis.

The party secured an absolute majority at a 1970 election, but ruling political elites and the military refused to transfer power, triggering massive street protests.

After a brutal military crackdown was launched on March 25, 1971, Bengali nationalists waged what they regarded as a war of independence.

On Aug. 15, 1975, a group of disgruntled military officers assassinated the man widely known as ‘Mujib’ along with most members of his family.

It is widely believed that political rivals, both within and outside of the Awami League, were linked to the murders through an international conspiracy.

Those killings were followed in November of that year by the military killing four of Mujib's allies in a Dhaka jail.

The AL has held power continuously since 2008, winning three consecutive elections, with an increasingly iron-fisted Hasina at the helm.

The 2008 poll was regarded as having been fairly supervised by a military-backed caretaker government, however, the 2014 election was widely regarded as tainted.

The archrival Bangladesh Nationalist Party (BNP) and it allies boycotted the election after Hasina refused to again allow a caretaker administration to oversee voting, giving AL an easy parliamentary majority.

In December 2018, AL and its allies won 288 seats in the 350-seat parliament amid widespread allegations of electoral irregularities such as vote rigging.

Critics of the government cite its intimidation of opponents, including religious and ethnic minorities, not least through prosecutions and forced disappearances.

Back in 2011, the AL reinstated "secularism" as a major state principle.

However, fearing a hard-line Muslim backlash, it has since not changed the status quo of recognizing Islam as the 'state religion' or removed a reference to 'Allah' in the constitution, legacies of past military rule.

Broadly, all major political parties except the AL are anti-secular, but it had failed to change a public perception that secularism is an "anti-religious" concept.

"So there is a risk of political loss if you press hard with it," Dr. Majumder added.

Nonetheless, there have been curbs on freedom of speech in recent years amid dozens of murders committed by local Islamic militants.

While in the past Hasina has been accused of trying to appease hard-line Islamists, a massive crackdown killed more than 50 militants and some extremist outfits were neutralized

However, a never-too-far-way threat remains from Muslim militants, some of them influenced by international terror outfits such as the so-called Islamic State.

Development but not enough

Once accused of being a pro-India party, the AL has managed to maintain a foreign and investment policy balance in relation to regional giants India and China.

And the nation's international image improved significantly in the past several years when PM Hasina gave shelter to hundreds of thousands of Rohingya refugees fleeing persecution in Myanmar.

Annual Gross Domestic Product (GDP) growth has averaged more than six to seven percent during the past decade, while the percentage of Bangladesh's population living below an official poverty line has fallen from 31 percent in 2010 to 21.8 per cent in 2018. Per capita income now stands at US$ 1,751. The country achieved 'middle-income status' in 2015.

Bangladesh is poised to achieve the third-fastest growth in the number of high-net-worth individuals in the world in the next five years, but it is also 148th out of 157 countries in the latest Oxfam Global Inequality Index.

Bishop Gervas Rozario, vice-president of Catholic Bishops' Conference of Bangladesh, believes that AL has proved to be the best of a bad lot given the poor past records of other parties and military regimes.

"So, when they have an income and food to eat, they don’t care about democratic principles like freedom of association and expression.

"This is a major weakness and really bad news for democracy."