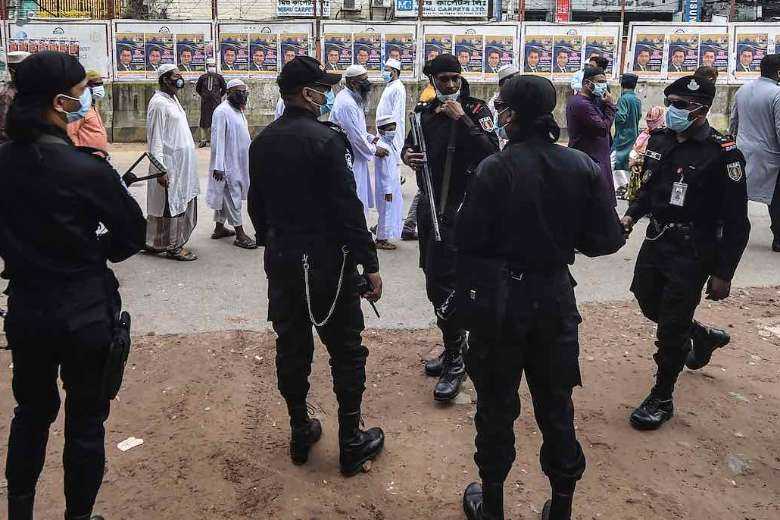 Rapid Action Battalion (RAB) members stand guard as people come to offer prayers to mark the start of the Muslim festival Eid al-Adha or the 'Festival of Sacrifice, in Dhaka on July 21, 2021. (Photo by Munir Uz zaman / AFP)

Families of victims of enforced disappearances allegedly perpetrated by an elite Bangladesh paramilitary group Friday called on the UN to ban the security force from serving as peacekeepers.

They made the call a day after 12 international rights groups including Amnesty International made similar demands to the UN Department of Peace Operations in a letter to UN Under-Secretary General Jean-Pierre Lacroix. The move is designed at adding pressure on Bangladesh authorities, especially its powerful military and police, after rights groups blamed the elite Rapid Action Battalion for gross human rights violations.They say the RAB enforced disappearances of hundreds of people, including many opposition activists and leaders."If Secretary General (Antonio) Guterres is serious about ending human rights abuses by UN peacekeepers, he will ensure that units with proven records of abuse like the Rapid Action Battalion are excluded from deployment," said Kerry Kennedy, president of Robert F. Kennedy Human Rights."The evidence is clear; now it's time for the UN to draw a line."The RAB, which draws officers from the armed forces and police, has come under intense pressure in recent weeks after the United States last month slapped sanctions against it and at least seven of its current and former officers including its current national police chief.Bangladesh has protested the sanctions and on Thursday home minister Asaduzzaman Khan defended the RAB."They are not highlighting the positive impacts of RAB has had on society. They are not talking about RAB's war on drugs and terrorism," he told reporters.Families of victims of enforced disappearances and politicians have also stepped up pressure on the tainted security force."RAB picked up my brother in December 2013 and we have never found him. My mother went to RAB headquarters every day for more than a year to find out his whereabouts," said Afroja Islam Akhi, whose brother Sajedul Islam was an opposition activist.Akhi, who helped set up Mayer Daak, which groups families of enforced disappearance victims, blamed RAB for abducting and disappearing more than 600 people."Can murderers and human rights violators be UN Peacekeepers? No way," she said.The UN sanctions on RAB has emboldened Bangladesh's opposition, which has held a series of massive rallies across the country.Reza Kibria, who heads the Gono-odhikar Parishad, a new opposition outfit, called for the disbanding the RAB."If we came to power, we would order a judicial commission to probe its human rights records," he told a rally on Friday.RAB was created in 2004 by the then Islamist-allied government to combat extremism and serious crimes in the country of around 170 million people.In January 2017, a Bangladesh court sentenced 26 people including 16 RAB officers to death after they were found guilty of involvement in the abduction and murder of seven people in the central city of Narayanganj.