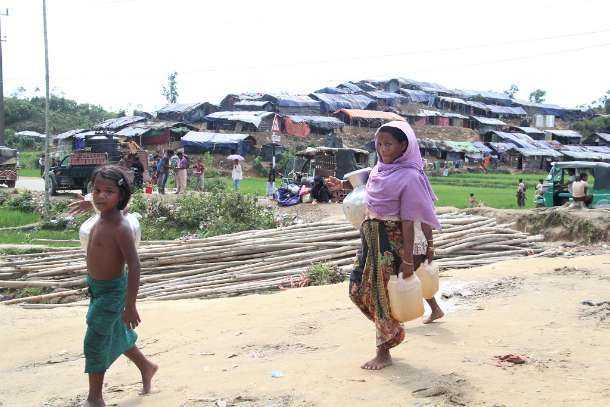 A church official and government representative have backed an appeal from five prominent rights groups to allow an unfettered visit to an island slated for the relocation of Rohingya refugees in Bangladesh.

“We request the government of Bangladesh to provide timely access to Bhasan Char, including unfettered access to meet with refugees, for a United Nations protection team, as well as for a United Nations-led technical team to review the sustainability and environmental conditions on the island,” the Nov. 12 letter said.

The signatories appreciated Bangladesh’s efforts to provide humanitarian assistance and emergency shelter to more than one million Rohingya refugees who fled brutal attacks by Myanmar authorities in 2016 and 2017 as well as Bangladesh’s role in providing shelter and support to hundreds of thousands of Rohingya who previously fled persecution in Myanmar.

The groups requested to facilitate and provide them with access to Bhasan Char to conduct a joint assessment of the facilities and conditions for those on the island at earliest convenience.

They sought permission to talk to Rohingya refugees privately from some 300 already on the island.

“We request the joint visit allow free and unfettered access to the island and ability to speak to Rohingya refugees privately. Our organizations hope to provide the government of Bangladesh with both public and private recommendations,” the signatories added.

Father Liton Hubert Gomes, secretary of the Catholic bishops’ Justice and Peace Commission, said the visit can be allowed on grounds of cooperation.

“We are aware that the government has spent a lot of money to maintain international standards to prepare Bhasan Char for Rohingya relocation. I don’t see any problem in the visit as the media has been given access and a group of Rohingya leaders also visited it,” Father Gomes told UCA News.

“I hope the rights groups come with a positive and cooperative approach about the relocation.”

The Foreign Ministry didn’t respond to calls from UCA News over the letter.

A commissioner of the state-run Refugee Relief and Repatriation Commission told UCA News that the agency is not aware of the letter and the decision to allow the visit of rights groups depends on the foreign ministry.

However, Auprba Das, who is in charge of one of about 30 Rohingya camps in Cox’s Bazar, said there is no reason to bar rights groups from visiting the island.

“Personally, I don’t see any problem in the visit as media outlets and Rohingya representatives have already visited it and their views were mostly positive. However, I won’t comment on whether the decision from the higher authority is positive or negative,” Das told UCA News.

Bhasan Char used to be an uninhabited, muddy island prone to flooding and storms during the monsoon season. It emerged from the sea about two decades ago, is cut off from land and takes about a two-hour boat journey to reach.

Bangladesh’s government first floated the relocation plan to transfer about 100,000 refugees in 2015 but stepped back after criticism from charities and rights groups. The plan was revived after the 2017 Rohingya exodus which saw more than 740,000 Rohingya flee to Bangladesh.

Local media reported that the government has spent over US$280 million on developing the island, including construction of 120 cluster villages and strong flood and storm embankments stretching over 13 kilometers.

Recently, various media outlets made trips to the island and returned mostly positive feedback. From Sept. 6-8, 40 Rohingya majhi (community leaders) from dozens of refugee camps in Cox’s Bazar went on a guided tour of the island and their opinions about the facilities in the island were mostly favourable.