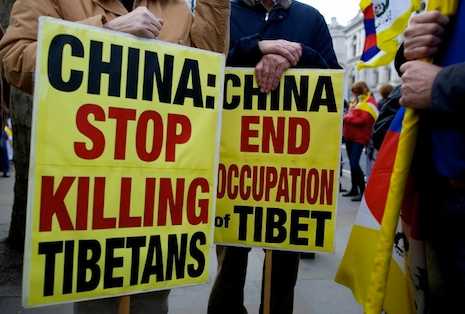 Protesters hold anti-China signs during a protest outside Downing Street in London marking the anniversary of the Tibetan uprising against Chinese rule on March 10, 1959 (picture: AFP Photo/Andrew Cowie)

Tibetans in Nepal face heightened risks of being detained, beaten and even forcibly returned to China, as Kathmandu bows to growing diplomatic pressure from Beijing, Human Rights Watch said Tuesday.

The allegations, detailed in a new report based on the testimony of Tibetan refugees, monks, activists and senior Nepalese officials, highlight the intensified restrictions slapped on Tibetans in the Himalayan nation since 2008.

Nepal, home to around 20,000 Tibetans, is under huge pressure from its giant neighbor China over the exiles, and has repeatedly said it will not tolerate what it calls "anti-China activities".

"Nepal...is succumbing to Chinese pressure to limit the flow of Tibetans across the border and imposing restrictions on Tibetans in violation of its legal obligations," said Brad Adams, Asia director at Human Rights Watch.

Tibetans face a de facto ban on protests, increased surveillance and even reported attempts to force escapees back to China in contravention of Kathmandu's agreement with the UN's refugee agency, the report said.

Although Nepal is not a signatory to the 1951 UN Refugee Convention, it operates a "Gentleman's Agreement" with the UN under which it guarantees Tibetans in transit safe passage to India, where they can obtain refugee status.

As Beijing and Kathmandu have tightened border restrictions, the number of exiles arriving in Nepal dropped to a record low of 171 in 2013, down from more than 2,000 in 2007.

In one instance, a former home ministry official told the rights group that local border police sent back Tibetans found in the border regions if they believed they were not "legitimate refugees".

There was no immediate response from the authorities in Nepal. AFP