Vinh Diocese asks Catholics to pray for victims of the attack, some of whom remain in hospital 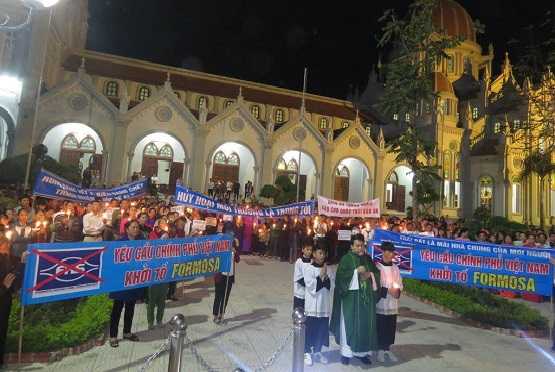 Thuan Nghia parishioners gathered on Feb. 19 to pray for Song Ngoc parishioners who were recently beaten by police while attempting to file a lawsuit. (Photo from nhathothaiha.net)

An international human rights organization is campaigning for the Vietnamese government to investigate police violence against some 700 marchers who were trying to file a lawsuit against a Taiwanese steel plant.

Amnesty International said hundreds of marchers, including women and children, from Song Ngoc Parish in Nghe An province were attacked by police while travelling to a court in neighboring Ha Tinh province. They intended to submit 619 individual complaints against Formosa Plastics, a Taiwanese company that spilled toxic waste into the sea in April 2016 causing Vietnam's worst ecological disaster, according to a Reuters report.

The complainants want damages totaling US$20 million for the devastation of fish stocks they depended upon for their livelihoods.

On Feb. 20, Father Francis Xavier Nguyen Hong An, head of Vinh Bishop's House Office, issued a statement calling on local Catholics to "show our solidarity and support and pray for victims to recover from their wounds soon." Father An said that dozens of people were badly beaten and some were still in hospital.

Father An added that Catholics must pray for "justice to be implemented in Vietnam and for authorities to be aware of protecting people's proper rights."

Last weekend Catholics from a dozen parishes in Vinh Diocese held prayers for the Song Ngoc parishioners and environmental protection. The Formosa unit is based in area covered by Vihn Diocese.

Amnesty International said that the group encountered a roadblock 20 kilometers outside Song Ngoc manned by about 2,000 police officials. While the peaceful marchers spoke with the authorities, they were attacked by dozens of men in plain clothes.

The assailants targeted anyone holding a camera or phone. While the violence only lasted a few minutes, the huge contingent of police did nothing to stop it.

Amnesty International said that unidentified people infiltrated the procession and started to throw stones at the police who responded with tear gas and flash grenades. While running away, the group was again attacked, this time by police, with fists, rods and electric batons.

According to the rights group, at least 15 men were transported from the scene by police, beaten and abandoned in remote areas to find their own way home.

In its urgent appeal, issued on Feb. 20, the organization called on people around the world to appeal to the Vietnamese government to "promptly investigate the attacks against the 700 people on the Feb. 14 and bring those suspected of responsibility to account in fair trials and without recourse to the death penalty."

They urged the Vietnamese government to "end its harassment of peaceful protesters, respect and protect the human rights to freedom of expression, association and peaceful assembly, and facilitate the lodging of complaints by those affected by the April 2016 ecological disaster."