A migrant worker is seen here on a fishing boat in Mahachai, on the outskirts of Bangkok. Despite a Thai clampdown, forced labor in the industry is still widespread Human Rights watch says. (Photo by Nicolas Asfouri/AFP)

Forced labor and various other rights abuses are still widespread on Thai fishing boats despite a government commitment to comprehensive reforms, a leading rights group said in a report released on Jan. 23.

Migrant workers from neighboring Southeast Asian countries are often trafficked into fishing work, prevented from changing employers, not paid on time, or paid below the minimum wage, Human Rights Watch said in the report.

The workers also do not receive protection under Thai labor law or have the right to form a labor union, the report added.

Despite receiving a yellow card warning that it could face a ban on exporting seafood to the European Union and being placed on the United States’ Tier 2 Watch List in its latest Trafficking in Persons report, there are still widespread shortcomings in the implementation of new regulations and resistance in the fishing industry to reforms.

Some measures, such as vessel monitoring and limiting time at sea to 30 days, have led to improvements for workers. However, those to address forced labor and other labor and human rights protection measures often prioritize form over results, the rights group said, adding its labor inspection regime is largely a theatrical exercise for international consumption.

Requirements that fishers hold their own identification documents, receive and sign a written contract, and be paid monthly are frustrated by employer practices which hold fishers in debt bondage and ensure they cannot change employers. The lack of a stand-alone forced labor offense in Thai criminal law leaves a huge gap in law enforcement and deterrence, according to HRW.

"No one should be fooled by regulations that look good on paper but are not properly enforced," Adams said. 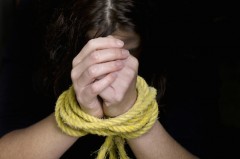 Thailand and Malaysia hit bottom in US slavery report