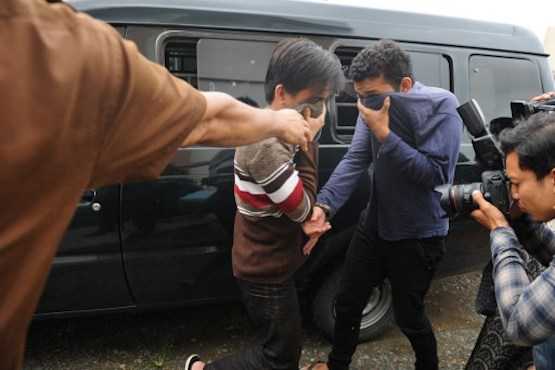 Two Indonesian men arrive for their trials at a Shariah court in Banda Aceh on May 17, 2017. The court sentenced the two men to be publicly caned for gay sex for the first time in Indonesia's conservative province of Aceh. (Photo by Chaideer Mahyuddin/AFP)

The men were prosecuted under Aceh province’s Shariah regulations and sentenced to 85 strokes of the cane. The sentence is due to be carried out on May 23.

On March 28, unidentified vigilantes stormed an apartment in Banda Aceh, the provincial capital, and took two men in their twenties to police for allegedly having same-sex relations.

"President Jokowi has spoken out in support of the rights of lesbian, gay, bisexual, and transgender people in Indonesia, so the imminent public flogging of two young men for same-sex relations is a crucial moment to act," said Phelim Kine, deputy Asia director at Human Rights Watch.

He "needs to be clear to Aceh’s authorities that flogging is torture for which they will be held to account."

The men had faced up to 100 strokes as punishment for same-sex behavior. The prosecutor had recommended 80 strokes because the men were young and reportedly admitted their guilt.

"The court’s less-than-maximum sentence of 85 lashes is no act of compassion. It does not change the reality that flogging is a grotesque display of medieval torture," Kine said.