Rights activists say there is no legitimacy to President Maithripala Sirisena's criticism of the nation's independent watchdog over its vetting of military personnel bound for overseas deployment under U.N. command.

The president said the deaths of two Sri Lankan soldiers on a U.N. mission in Mali on Jan. 25 could have been avoided if Sri Lanka's Human Rights Commission (HRCSL) had expedited reinforcements to the African country so Sri Lanka could shore up its troops there.

The troops who died were on an extended stay awaiting replacements. This process was delayed as, according to Sri Lankan law, the next batch had to be cleared of any past atrocities or abuses during their service before they could be "cleared" to support the U.N. "blue berets."

Sirisena told parliament on Feb. 6 the HRCSL should be siding with the military instead of raising questions about its operations. The watchdog has exceeded its mandate and become a thorn in the side of law enforcement agencies, he added.

The commission fired back with a three-page rebuttal on Feb. 8 rubbishing the president's claims. 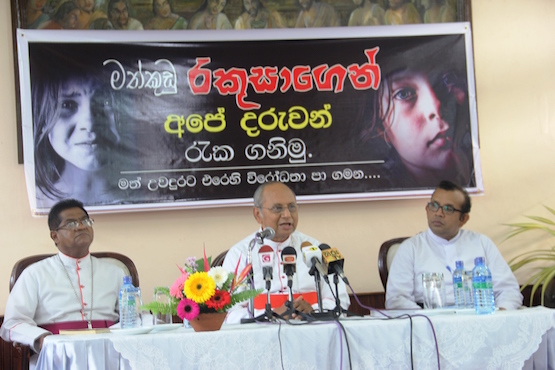 "We inform your Excellency with great respect that it is absolutely incorrect to state that bringing back the Sri Lankan troops from Mali was delayed because of delays on the part of the Human Rights Commissions," it said in a letter signed by the agency's chair, Dr. Deepika Udagama.

"The vetting process was suspended until a Standard Operating Procedure (SOP) was drafted, which was a unanimous decision made by all stakeholders (including the military and the U.N., in June 2018)," it continued.

It said the U.N. had placed its trust in the body in 2016 and agreed to let it carry out the vetting process for international peacekeeping personnel in recognition of its independent status.

"In the past three years, we have worked tirelessly to build respect for and trust in the HRCSL. As a result of that, the commission was awarded international recognition in 2018 by the Global Alliance of National Human Rights Institutions (GANHRI)," the letter read.

"Not only are we disheartened by the unjust criticism but are also discouraged," the agency added.

"We appreciate any just critique and consider it to be a step to further growth and betterment, which we believe will serve the country better."

Two days later, another 10 peacekeepers from Chad were killed and over 25 wounded in another attack on the mission's camp in Aguelhok, eastern Mali.

While no group has claimed responsibility for either incident, al-Qaeda-linked insurgents are suspected of orchestrating the second attack.

Jayan Senaviratne, who fights for the rights of victims of enforced disappearance in Sri Lanka, said the U.N. has been full of praise for the commission so far.

The commission described its nomination as the only national institution selected to undertake the vetting process, amongst all countries that supply troops for peacekeeping missions, "as a triumph for Sri Lanka."

The president also slammed the HRCSL for questioning his recent decision to deploy an elite corps of police called the Special Task Force (STF) to Angunakolapelessa prison.

The president told parliament the HRCSL had been acting in "an obstructionist manner."

But the watchdog countered that it was within its rights to safeguard the detainees incarcerated there due to concern about another prison massacre after what transpired at a similar facility seven years earlier.

In addition to the 27 inmates who died during the Welikada prison riots in 2012, at least 40 others were injured.

The government appointed a committee to investigate but critics say Sirisena has failed to act on its findings.

"Detainees and their family members have lodged complaints to the commission regarding the recent deployment of the STF and various other issues stemming from the deployment. It is the duty of the commission to clarify matters related to such issues," the watchdog said.

Parliament speaker Karu Jayasuriya defended the HRCSL and said it was working within its mandate.

Sirisena has also come under attack for championing the use of the death penalty, a policy he plans to implement soon following a visit to the Philippines in January.